Bialys are a delicious, chewy onion rolls that are often confused with bagels. They originally came from Jewish bakeries in Białystok, Poland, a thriving city that was predominantly Jewish. During the Nazi occupation of Białystok in WWII, the bakeries that made this bread disappeared, but by then the bialy had already been imported into the Jewish bakery scene in the Lower East Side of Manhattan by emigrating Polish Jews.

This history comes from a National Geographic article, which profiles the book, The Bialy Eaters: The Story of a Bread and a Lost World by Mimi Sheraton. Here’s an excerpt from the article:

Over a seven-year period in the 1990s, [Sheraton] interviewed bialystokers all over the world who recalled the kuchen bakeries on neighborhood corners; the women who sold the warm rolls out of big woven baskets, how they ate them with smoked fish, soup, potatoes or even halvah (a soft, sesame paste candy.)

Another interesting article in Serious Eats explains the lineage of the bialy and its not-relationship to the bagel.

Americans lump bialys together with bagels, but the bread really belongs to what bread expert Andrew Coe calls “that great, forgotten tradition of Jewish rolls” and, more specifically, onion breads. “There’s a whole bunch of Jewish breads that involve onions, not just the bialy,” Coe elaborated, “and those didn’t make it into the American mainstream, either.”

The bialy has lived on, somewhat quietly, in bakeries in New York City and in parts of the U.S. where New Yorkers have migrated to over the past century. I was introduced to bialys one college summer when I lived in Brooklyn and worked in a diner. 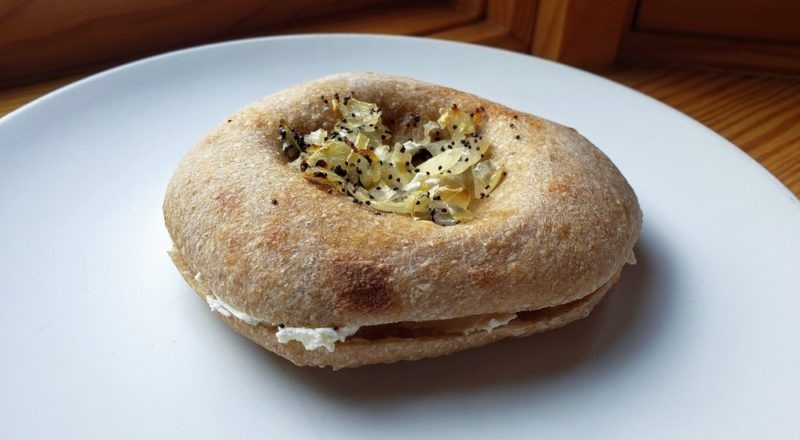 The diner served a few foods I’d never heard of while growing up outside Washington, D.C.: bialys, scooped out bagels, and egg creams. Back then, bialys struck me as being tiny dry oniony pizzas that were fantastic with butter. Scooped out bagels are just what they sound like: all chewy caramelized crust. An egg cream is a combo of milk, seltzer, and vanilla syrup. No egg. The name was originally Yiddish “echt keem” for “pure sweetness.”

I haven’t yearned for the latter two things much in the years since, but bialys? I have wanted them, so I was thrilled to work on this recipe to try to achieve that tastiness and texture, but with sourdough leavening and more healthy whole grain flour. I studied a lot of recipes. A few were flour-water-salt-yeast, but most had a couple of teaspoons of sugar and one had 1/2 tsp of onion powder. In the end, knowing there’d be flavor from the whole grain flour and the sourdough leavening, I went with the simplest dough. 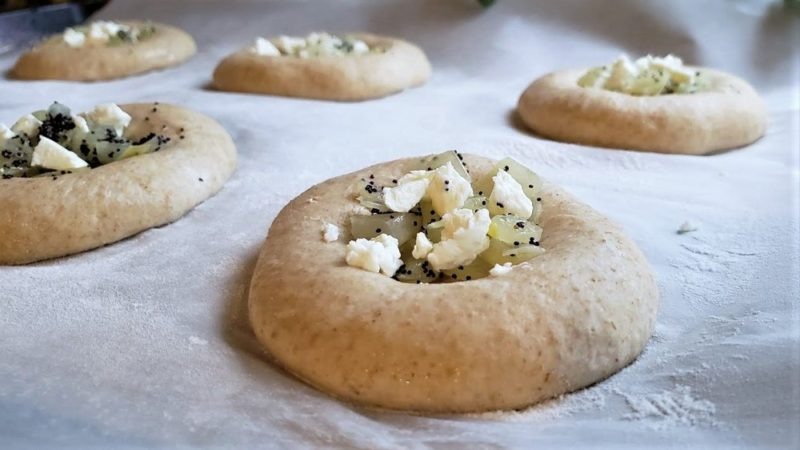 The bialys I remember were dusted with rice flour. One recipe suggested that, and many more suggested cornmeal. I tried both and had no preference. If you use parchment paper on your baking sheet, you probably don’t need either.

For the traditional onion-poppyseed filling, the only variation I found was that some recipes added bread crumbs to the mix. I skipped the bread crumbs, but if you’d like to learn more about using them, and also see the recipe that inspired my secondary filling: dates and goat cheese, check out this Hot Bread Kitchen recipe. For the dates-goat cheese filling, I didn’t use honey and I added rosemary to the mix, but you may prefer their version. I also plan to try dates, rosemary, and brie cheese at some point. 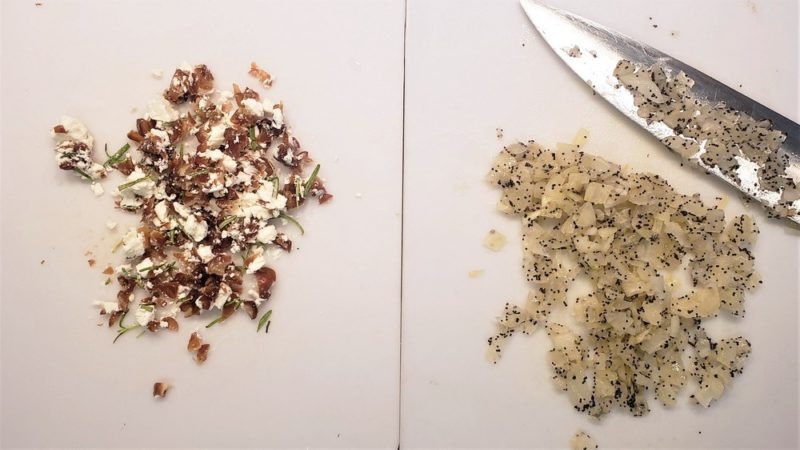 I outline a fermentation schedule for doing a morning bake in the recipe below. I prefer the bulk fermentation be “no knead” and overnight at room temperature, but you can stretch and fold the dough if you want and also retard it after the first rise if you want different timing. 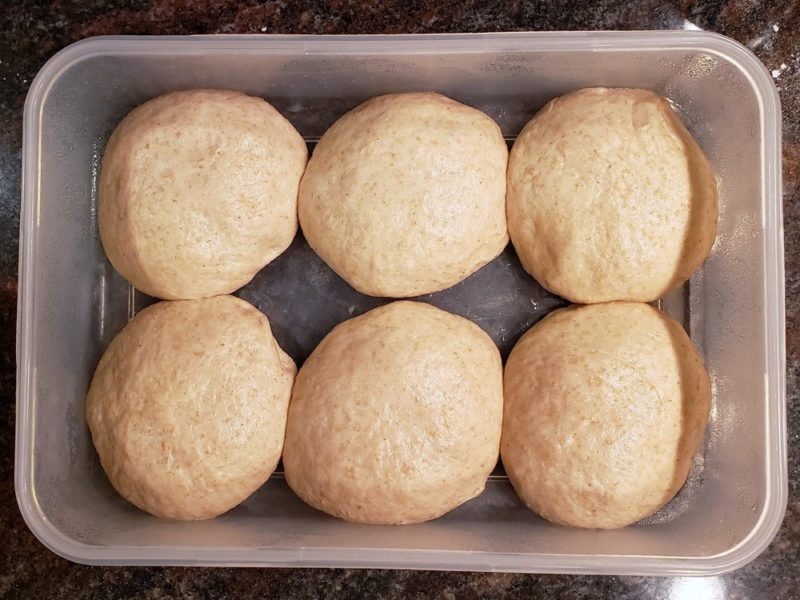 An early test bake where I retarded the pre-shaped dough overnight. The results were delicious but more sour than I was looking for.

In the recipe below, the final proof takes place with the pre-shaped balls. Then you’ll shape the dough and fill it about 20 minutes before baking. I tested proofing after shaping and filling the dough, but the bialys ended up domed (left). The bialys on the right were a test bake with just a bench rest, no final proof, and they were a little flat. 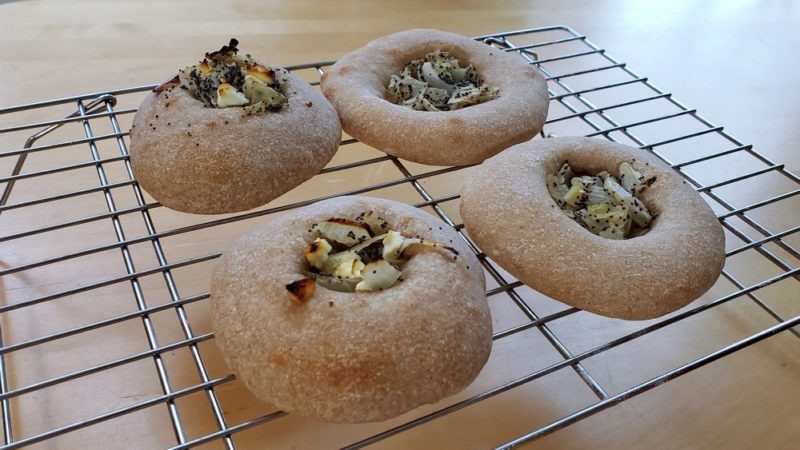 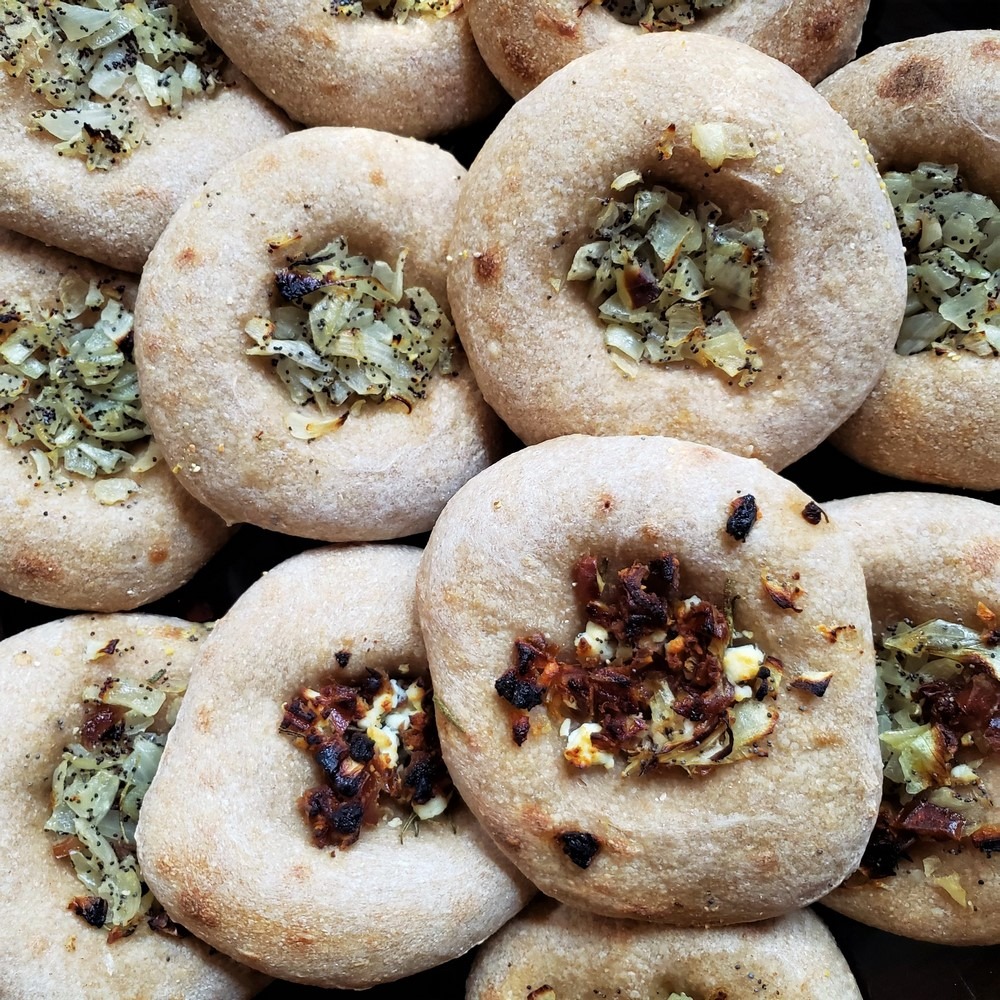 Bialys are delicious, chewy bread circles with a depression in the center that’s traditionally filled with onion and poppyseeds. These bialys have a hearty whole grain component and a large sourdough pre-ferment. Choose between the classic onion-poppy seed filling or a date-cheese-rosemary filling, or make a mix of both. 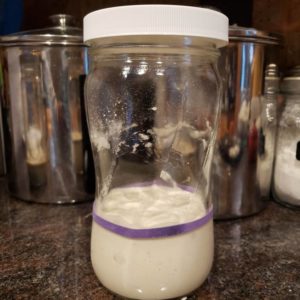 Fed and expanding during the day 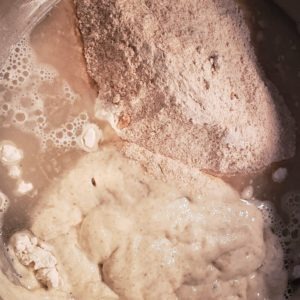 Mixing in the evening 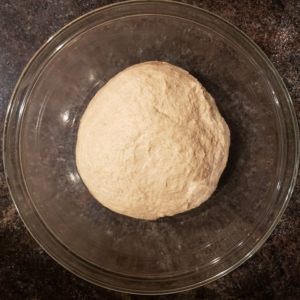 Beginning of the bulk fermentation 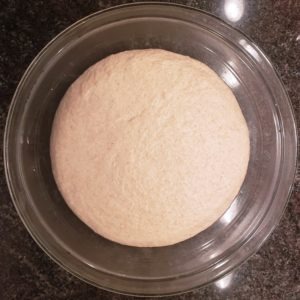 About 10 hours later at approx 67F 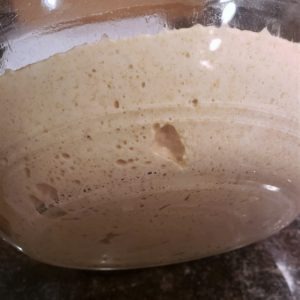 The underside of the bowl 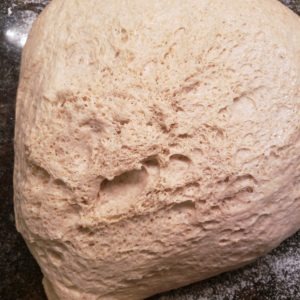 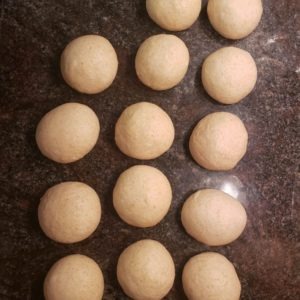 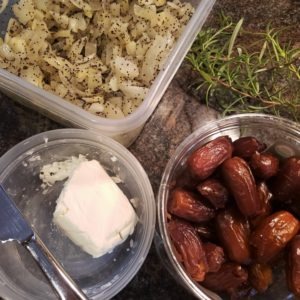 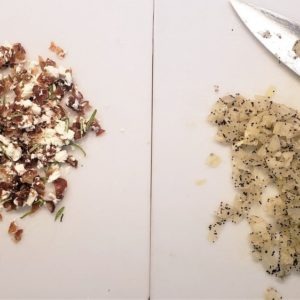 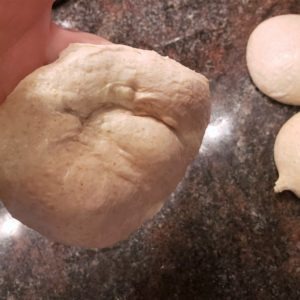 Gently stretch the dough until it has a thin center 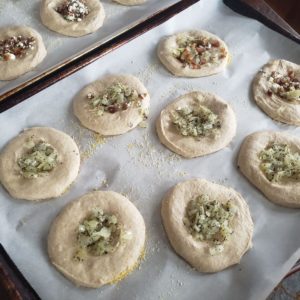 Lay the dough on a baking sheet and fill 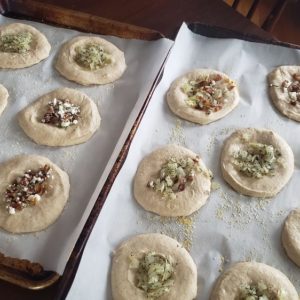 Brush the dough with water 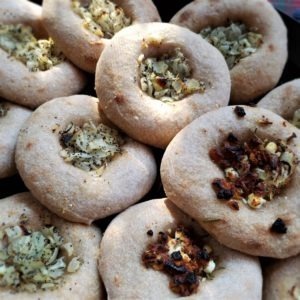 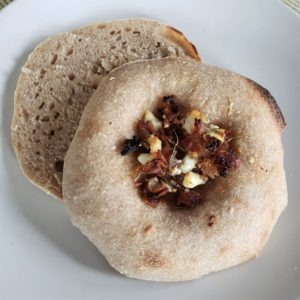