This delicious French bread is part of a Christmas tradition of 13 desserts in Provence, and it tastes like my idea of the perfect donut. It’s airy and subtly sweet with citrus and anise aromatics. Pompe à l’huile is actually a sort of brioche-fougasse hybrid that dates back to at least the 1600s. Pompe (French: pump) refers to a pump of olive oil, and this bread traditionally doesn’t have butter or eggs in it.

The cuts made in the dough before the final proof make it a lovely pull-apart dessert or breakfast bread to share while warm, though it also keeps well wrapped in plastic and softened in the microwave for 10-15 seconds just before eating. 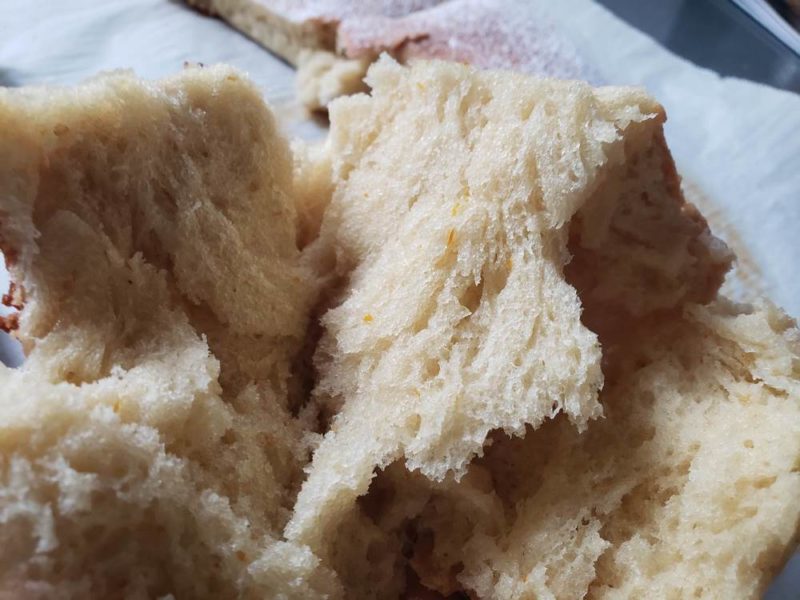 Pompe à l’huile can be plain, allowing the fruity flavors of a good olive oil to come through, or as in the recipe below, flavored with orange blossom water, orange zest and juice, and ground anise. The final sprinkling of powdered sugar on the bread is optional. 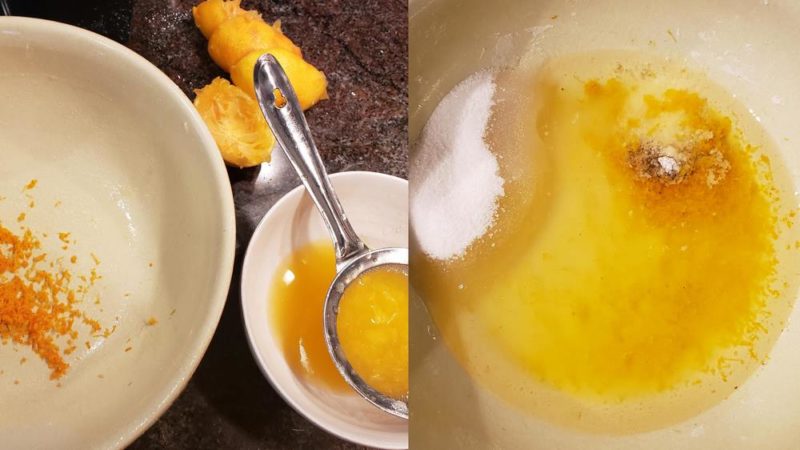 I made yeast and sourdough versions of this recipe, testing each leavening type a couple of times to iron out measurements and methods. Please keep in mind that your kitchen temperatures, and yeast or starter liveliness may make your rise times different from mine. See the note on temperature below, and look to the gallery following the recipe for before and after photos that show target fermentation and dough expansion.

The recipes I studied used a yeast poolish, like this Saveur recipe, or they used a combination of instant yeast and stiff sourdough starter, presumably for flavoring, and perhaps for a fermentation boost, like this recipe video from Ecole Internationale de Boulangerie. I learned about the history of this bread from baking-history.com and that recipe also used instant yeast and a stiff starter. 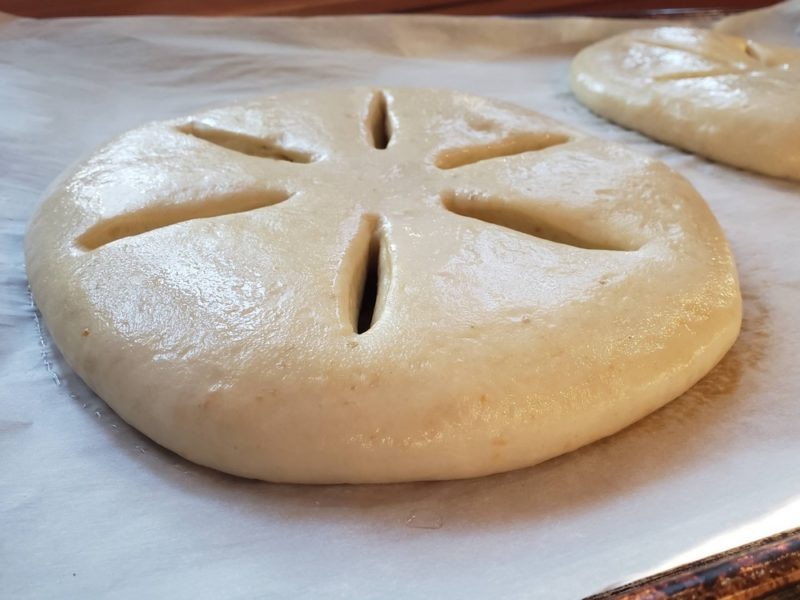 My own instant yeast version doesn’t have a preferment and actually uses a lot of yeast, yet I found the fermentation to be slow enough to develop good flavors and gluten strength in the dough. Initially, I made this dough with a mix of a light olive oil and an extra virgin olive oil with a very high polyphenol level (dark green and bite-y in flavor, antioxidant properties). That dough’s fermentation was comparable in length to what I would expect from sourdough, with more than 7 hours at room temperature. I did a little science reading to investigate this, and I suspect that the polyphenols slowed the fermentation. This “antioxidant” bread was quite delicious, but for a second test bake, I used only light olive oil to get a faster rising time, a smidge longer than a typical yeast leavened challah, which has both oil and eggs. 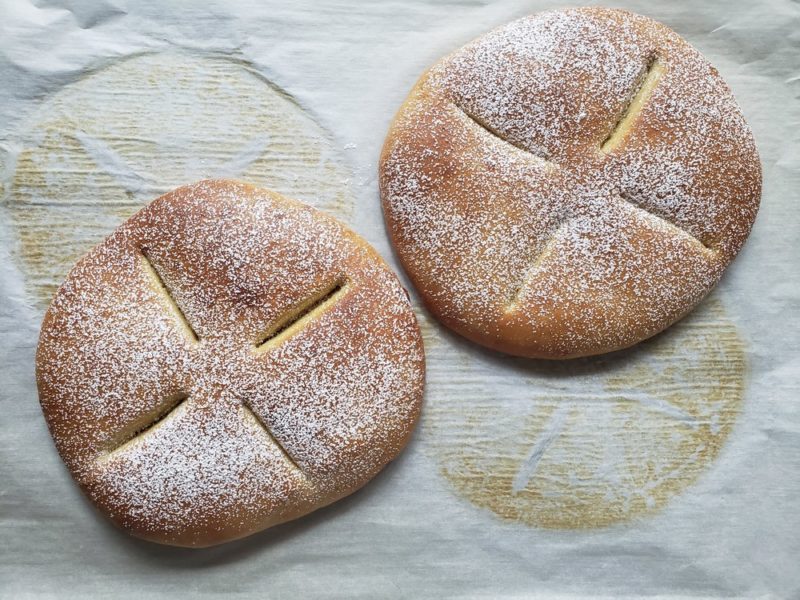 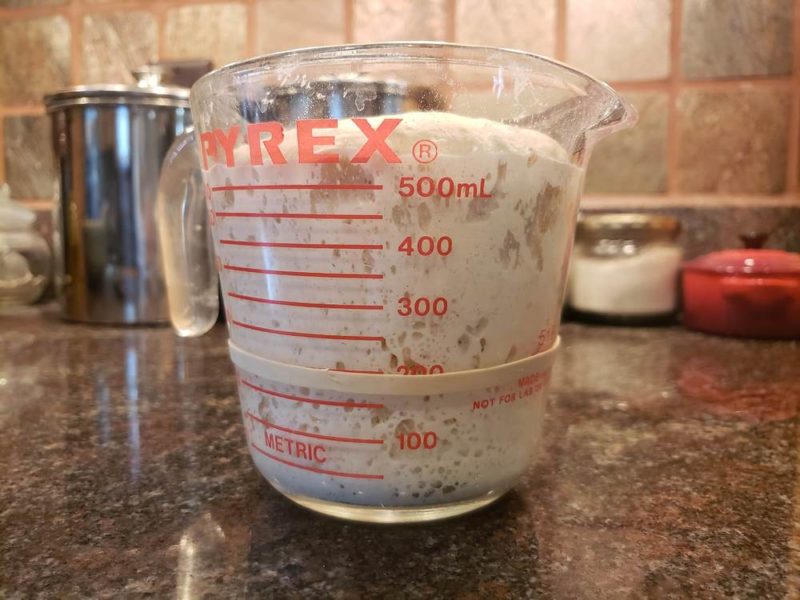 I started my first test batch in the early afternoon and needed to refrigerate it overnight when it wasn’t ready at a reasonable time. This resulted in increased acidity in the dough and minimal Maillard reaction. For the second batch, I grew the levain overnight, mixed the dough in the morning, and was able to bake on the same day. That faster sourdough process indeed resulted in a less sour bread, but with the scrumptious added flavors from lacto fermentation. 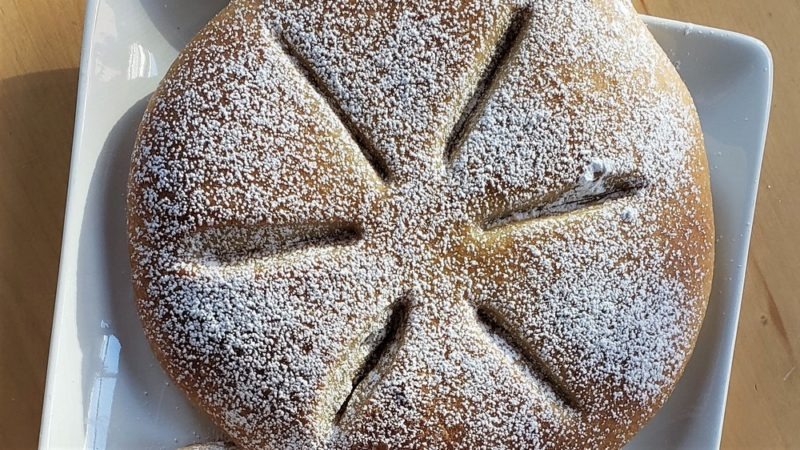 I give instructions on how to build a stiff levain in the recipe below. However, you can arrive at the 250g levain in a different manner if you prefer. To not recalculate the water and flour amounts of the recipe, aim to have 160g flour and 90g water in your final build, about 56% hydration. If you want to experiment and use 250g of a typical 100% hydration starter, simply use 375g flour (500-125) and 45g water (170-125) in the final dough. I plan to try this some day and report on how it turns out.

Both of my sourdough test bakes began fermenting at warm temperatures, in the low 80s, on the Raisenne in one case and in the oven with the light on in the other case. After hearing reports from a few bakers that their sourdough doughs did not rise at all, despite their use of lively starter, I would urge anyone making sourdough version of the recipe to keep the dough warm at least until the fermentation takes off. As I mentioned above, I did retard one of the sourdough doughs, but well after it had started expanding.

Based on my research, pompe à l’huile usually have four or six cuts. I found that a metal spatula worked perfectly for cutting the dough, but in many videos, people used a wooden tool, or when the rounds are large, their bench knife. 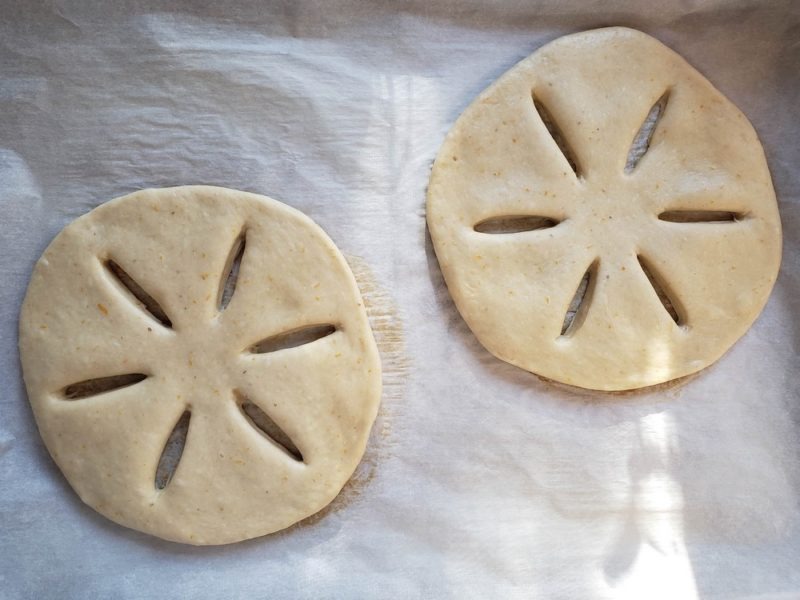 Also, some bakers make a circle in the center of the dough with a small glass as in this video from ProvenceTV.fr. The dough is proofed on round pizza pans covered in aluminum foil in that video, but I used one large baking sheet with parchment paper. With my final batch of sourdough leavened pompe à l’huile dough, I actually decided to explore some different shapes. 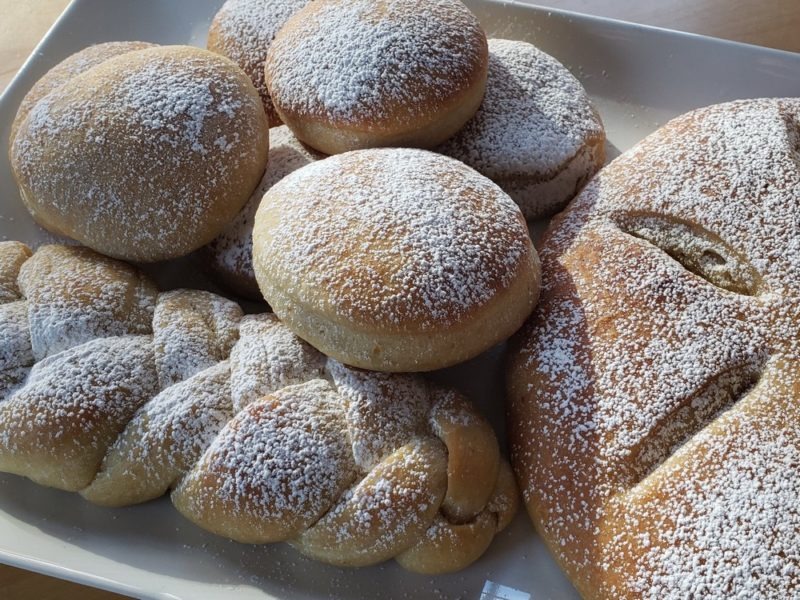 “Donuts” cut out from the rolled out dough with a pint glass, and a braid made with scraps.

The recipe below lists “the zest of a medium orange,” but if you have mandarins or tangerines, that’s fine too. I used two mandarins for each batch of dough. Also, if you don’t have orange blossom water, you can use additional fresh orange juice or 2-3 drops of orange extract in a tablespoon of water.

My ground anise was milled fresh in my Mockmill. Using whole anise seeds or skipping the anise are also options. 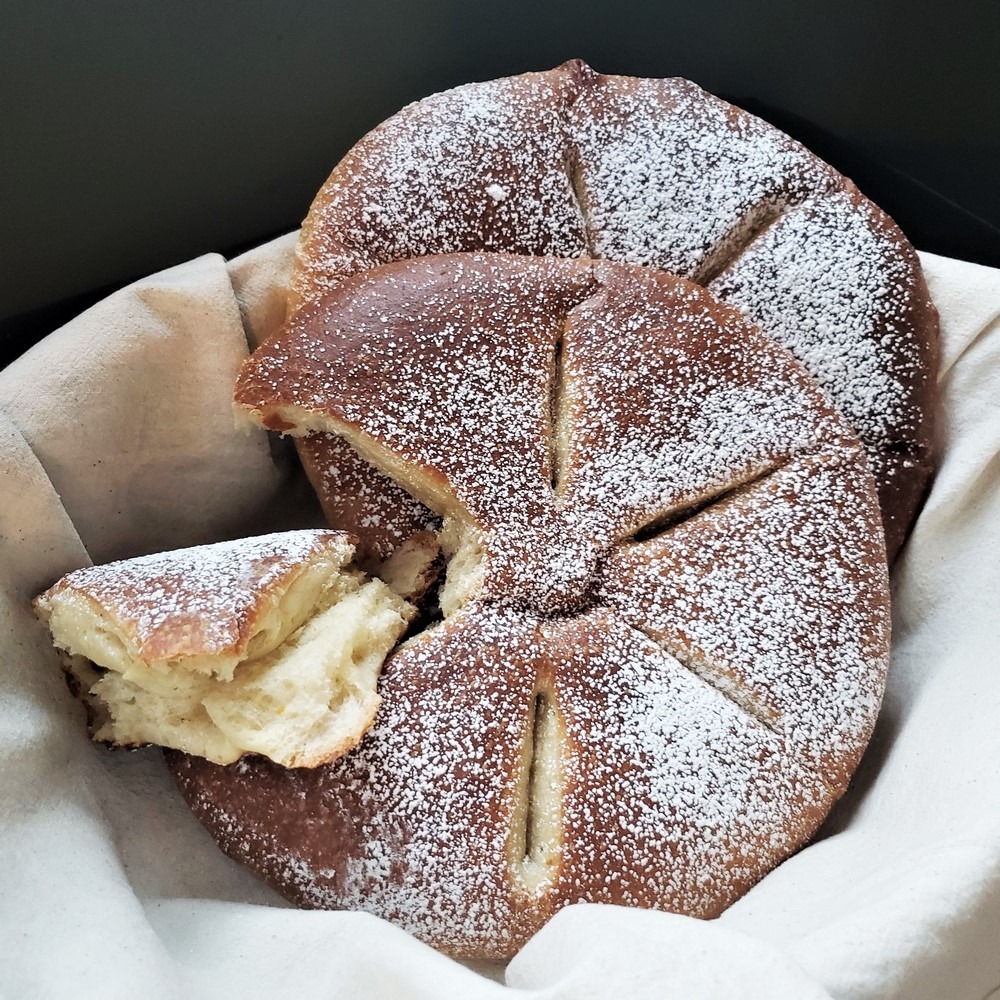 Pompe à l’huile is a traditional Christmas dessert from Provence, France. It’s an olive oil bread that’s subtly sweet, very soft, and tantalizingly aromatic with orange and anise. The bread is made in a pull-apart style that’s perfect for sharing and savoring warm from the oven.

M&S Food products to take place sale at Costa shops in 2022 888011000 110888 M&S Food is linking with Costa to offer its items, including sandwiches, in greater than 2,500 of the coffee chain’s shops across the UK next year. The&deal will certainly include over 30 M&S Food products and available outlets include Costa’s drive-thru stores The full listing of products to take place sale will certainly be launched ahead of the full launch in 2022 yet along with sandwiches the ‘Costa Coffee Now Serving M&S Food’ deal will consist of new lunch alternatives, warm dish boxes and children’s food. “Following the current launch of our remarkable brand-new joyful menu, we are happy to bring further cheery cheer by announcing a brand-new food cooperation with M&S Food, releasing following year,” stated Neil Lake, managing supervisor, Costa Coffee UK & & Ireland. “This partnership with M&S Food will improve our existing food variety and help us fulfil our ambition to come to be the first choice for consumers acquiring food and also coffee on-the-go. We’ll use our joint proficiency to develop a food experience of the highest possible high quality, worth and also quality– all offered with a completely crafted Costa coffee,” Lake included. Stuart Machin, chief running police officer and M&S Food managing director, stated that partnership supported the seller’s larger method of making the brand name “more relevant, more frequently for households”. “M&S Food is popular for fantastic high quality food on-the-go at superb value. This partnership gives much more consumers the opportunity to enjoy our variety of delicious sandwiches, salads as well as treats in over 2,500 areas throughout the UK– not just on the high road however in area locations and also retail parks,” Machin included.