Pane di Altamura is a traditional bread from the Puglia region of Italy. This bread pairs well with olive oil or butter, dipped in soups and stews, and is a great sandwich bread. Altamuran bread is made with durum wheat, which is high in protein and has a nutty, mildly sweet flavor.

True pane di Altamura has a special designation, Denominazione di Origine Protetta (DOP), meaning the ingredients come from a particular region and the bread has to meet specifications of taste, texture, and aroma. This includes a crust that is 3mm thick, a pale yellow crumb with a homogenous aveoli distribution, and a mildly sweet, not particularly acidic flavor.

I developed two recipe versions below that I believe hit the crust requirements and the flavor description, but they have ingredients from North America and are baked in a home oven (not a wood-fired oven), so I’m calling this “Altamura Style Bread.” The crumb of both versions is also a bit too open and irregular for the traditional bread requirements, but you can de-gas the dough more aggressively during shaping if you wanted a more closed crumb. I kind of enjoyed how the air pockets helped divide the swirly pattern of the shaping folds. 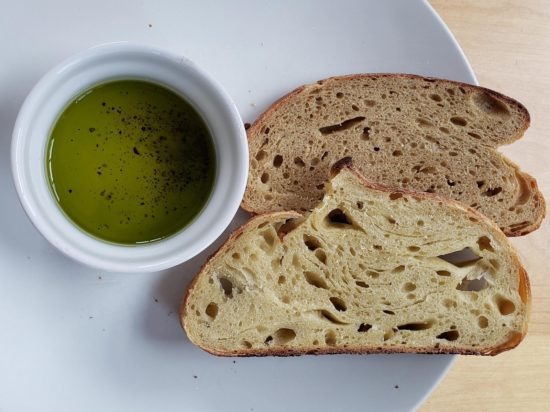 Whole grain durum (60%) on top; Semolina on the bottom.

Flour Types: Semolina flour and durum flour both come from the durum wheat berry. Semolina consists of the middlings or endosperm of the durum wheat berry, and is available in coarse, medium, and fine textures. It doesn’t feel like regular flour; even fine semolina feels a bit sandy, but this texture doesn’t come through in bread or pasta made with it. 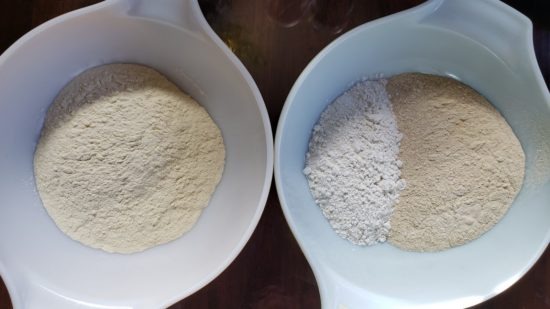 Traditional pane di Altamura is made with fine semolina flour (rimacinata or re-milled). I wanted to make this traditional version, and also a version with whole grain durum flour. I used some bread flour (40%) in the whole grain durum loaf to approximate the texture and gluten strength of using only semolina. If you have sifted or bolted durum flour, you might try an 80:20 ratio (320g bolted durum and 80g bread flour) to arrive at a similar bread. (Also drop the water in the recipe by about 20g.)

The semolina flour was less thirsty than my durum-bread flour mix, so you’ll notice that the hydration of that dough is lower to achieve about the same dough-feel. 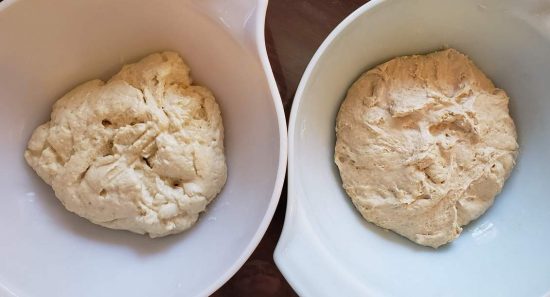 Sourdough Levain (Starter): The traditional levain for this bread is lower than 100% hydration. I give instructions in the recipe to build up 160 grams of 73% hydration levain using the durum/semolina flours. If you prefer to use 100% hydration starter though, simply add 13g water and subtract 13g flour from the dough amounts, or don’t make any other changes and don’t worry too much about the difference. 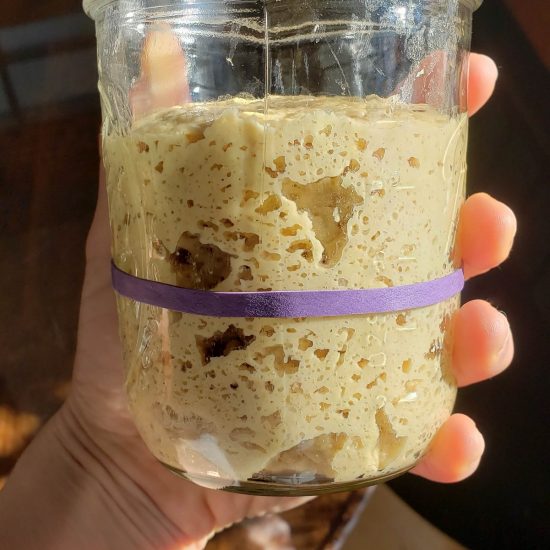 Gluten Development: For all but the first test bake, I developed gluten in the dough by slapping and folding it for about 7 minutes. This transformed the dough from goopy pile to a smooth textured but still sticky blob with a decent windowpane. Here’s a quick video showing this progress.

Fermentation: The durum dough fermented faster than the dough with semolina flour. I expected this given how the microbes in sourdough starter are highly nourished by whole grain flour. With the relatively large amount of starter in this recipe, the doughs only needed 4-6 hours to double during the bulk fermentation. I took the bulk fermentation pretty far in these doughs because after the preshape, there’s only about 1 hour before the dough is shaped and immediately loaded into the oven. 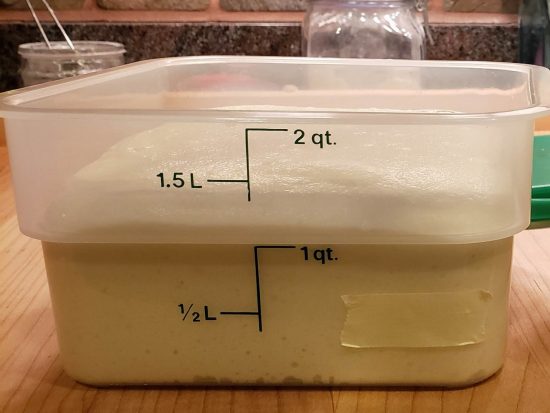 Doubled dough at the end of the bulk fermentation

Shaping and Dough Consistency: I was very intrigued by the shapes of this bread. There is the low shape or forma bassa, which is also known as cappello di prete (priest’s hat) and looks like a relatively flat boule. And there is the high shape or forma alta, which is also described as accavallata (piled up) and in a local dialect, sckuanète or crossed. This shape is supposed to have a longer shelf life due to its large soft center, and it’s the one I wanted to learn. 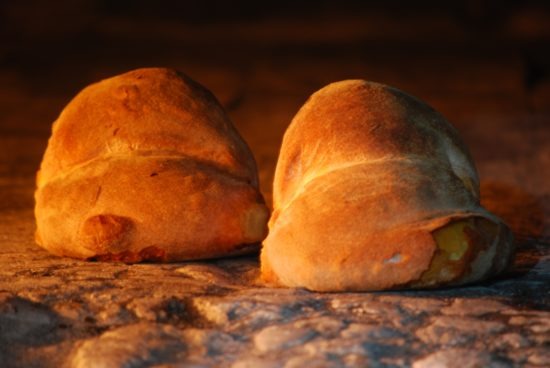 With five different test bakes, I tried to get bread that looked like what’s in the photo above. I focused on the whole grain durum and bread flour recipe, since the traditional semolina rimacinata recipe is fairly consistent everywhere it’s found online and in books.

After handling an overly stiff dough in bake #1, I watched many YouTube videos to try to guage the dough consistency to aim for. The videos showed a much floppier dough than what I’d had. I also tried to nail down the sequence of moves for shaping the dough. Most helpful was the 10 seconds of shaping starting at minute 6:05 in this video from Puratos Group, watched at half-speed.

With bake #2, I went with a higher hydration and this yielded a pretty awesome bread but it wasn’t particularly true to style in shape or crumb. With bake #3, I dialed back the hydration a little by adding more flour and felt my dough had gotten too large and wide.

Bakes #4 and #5 worked out well and these are what the recipes and shaping video below are based on. 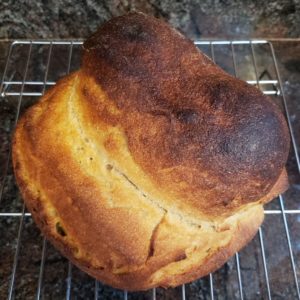 Bake #1 a nicely piled up shape 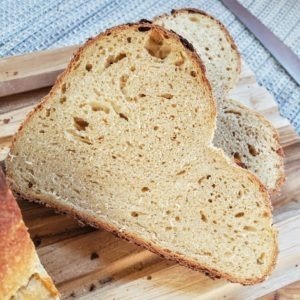 Bake #1 crumb was a bit dense and not chewy 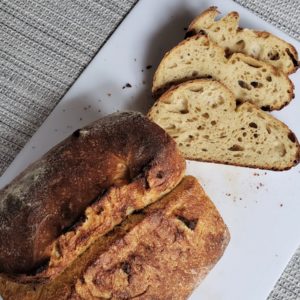 Bake #2 was chewy but too wet/open 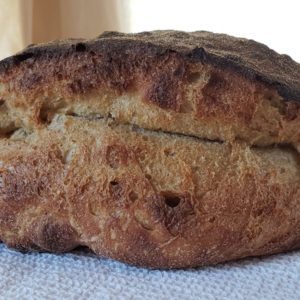 Bake #3 shape was too wide 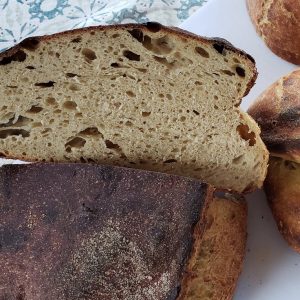 Bake #3 crumb was fairly on point 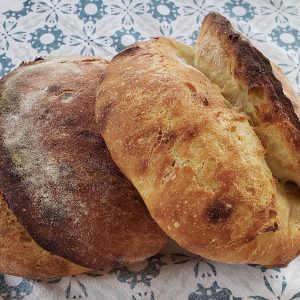 I practiced the shaping of this dough a lot and made this video for reference. The first dough I shaped is with durum and the second with semolina. 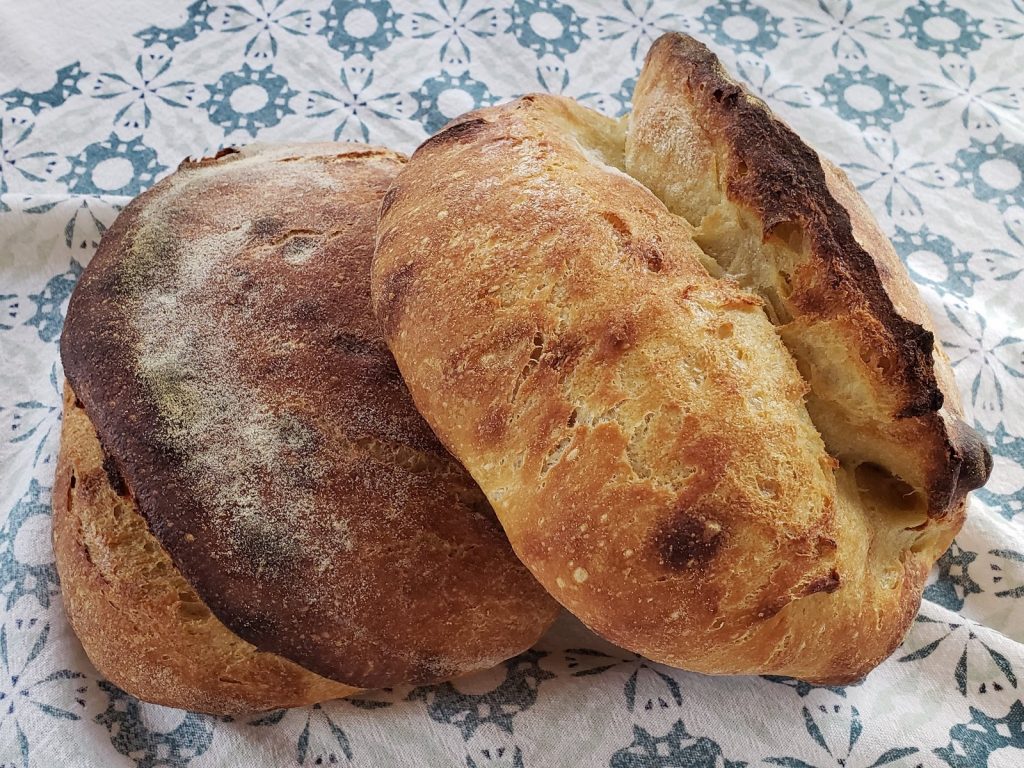 Altamura style bread is full of delicious nutty and slightly sweet durum wheat flavor. It has a great mouth-feel, with a chewiness that’s great for dipping in olive oil or stew, or for use as a sandwich bread. Try the whole grain durum version or the semolina version, and enjoy the challenge of shaping the bread in the traditional “piled up” form seen in bakeries throughout the Puglia region of Italy.