I have to admit I never thought I’d love whole grain baguettes, let alone watch my family gobble them up faster than I could bake them. When the Breadtopia team suggested I try using our new whole grain all purpose flour milled from hard red winter wheat for baguettes, I thought to myself, “But the French baguette is all about European T55 flour, basically a white all purpose flour.”

Well, let me tell you, it’s time to shake up that tradition.

These whole grain baguettes are amazing. They have an aromatic soft wheat flavor and zero bran bitterness. The crumb is tender, chewy, and much to my surprise, wonderfully full of air pockets. Compared with refined flour baguettes, the crust is not quite as thin-crispy, but this is a minor compromise in exchange for a full-fiber, flavorful, and spectacularly holey baguette.

In my test baking, I played with a bunch of variables to try to get an ideal baguette and to better understand the impact of hydration, degree of fermentation, baguette thickness, and pre-shape vs. no pre-shape.

You can skip right to the recipe or read about these tests if you want to understand how to achieve slightly different results. For example, test bake #2 (not the final recipe version) actually had the most open crumb due to skipping the pre-shape and rolling a thinner baguette. So, if you don’t mind the minimal score bloom, this may be the approach you favor. 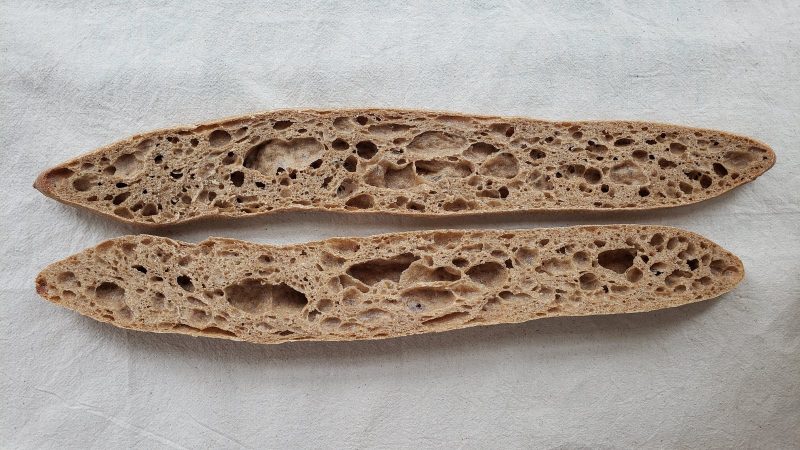 Fermentation: I didn’t vary the fermentation of the different test doughs by much. They ranged from 50-65% dough expansion during the bulk fermentation, and all test bakes had a final proof at room temperature for 30-50 minutes while I set up and preheated the oven. When I did a pre-shape, the bench rest was about 20 minutes, and that’s why the final proof is a range.

Gluten Development: I also did extensive, similar gluten development on all the batches of baguette dough. This began with a saltolyse to hydrate the whole grain flour and get a head start on gluten development. After adding the sourdough starter, I rolled or coil folded the dough, laminated it, and then did one more round of folding (each with a 20-30 minute rest in between). We have videos of these gluten development techniques.

This batch of demi baguettes had a nice score bloom and shape, but the crumb was too tight likely due to how dry the dough felt at 73% hydration. The dough expanded by about 50% during the bulk fermentation and I skipped the pre-shape because the dough was so dry and easy to handle. 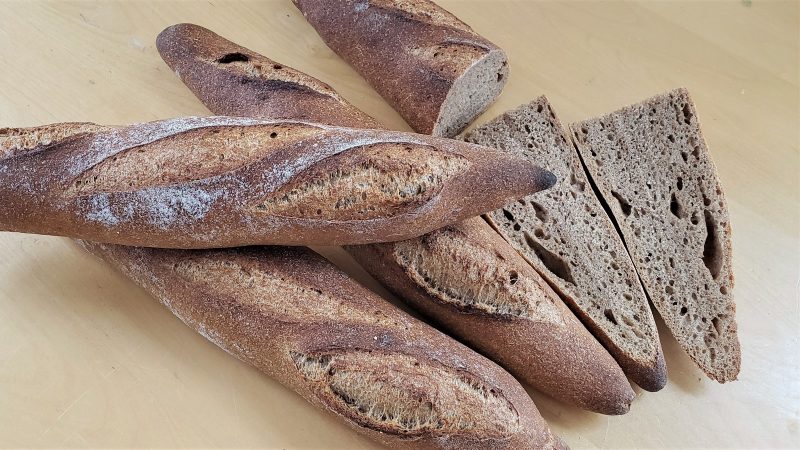 Rather than move in small increments, I increased the dough hydration to 83% with this second batch of baguettes, and fermented to 60% dough expansion. I skipped the pre-shape again and rolled the demi baguettes thinner. I was rewarded with a very open crumb, but these baguettes were relatively flat with no score bloom. 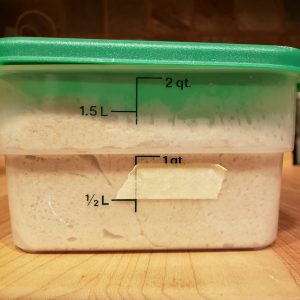 83% hydration, about 60% expansion during the bulk fermentation 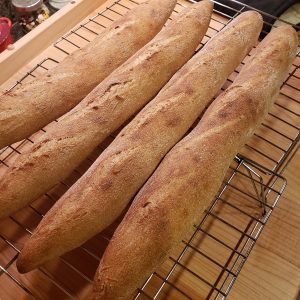 I made these baguettes even wetter (85% hydration) and a bit smaller in hopes of getting more score bloom while preserving the open crumb, and again I fermented the dough to about 60% expansion. I also tested pre-shaping vs. not pre-shaping. The pre-shaped baguettes had more score bloom but a less open crumb. Overall, I was happy with these results, but wanted to push hydration even further. 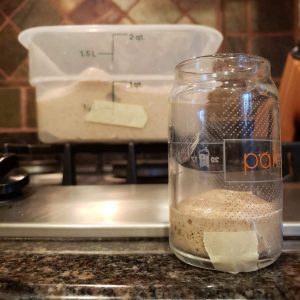 85% hydration, about 60% expansion during the bulk fermentation 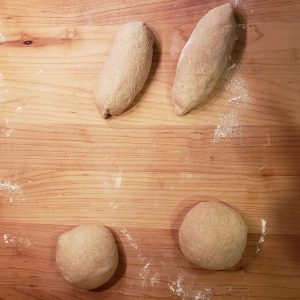 Pre-shaped and rested vs. rolled into tubes immediately after dividing 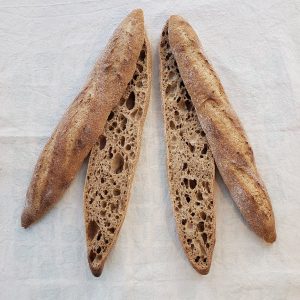 I increased the hydration to 87% in this batch and fermented it a little more than usual (about 65% expansion). I skipped the pre-shape for all four baguettes, and I tried scoring two of the baguettes with a line down the center, which is a common alternative to the diagonal slashes. This dough felt too floppy and unstructured without the pre-shape; and the final results show an uneven crumb and little score bloom. 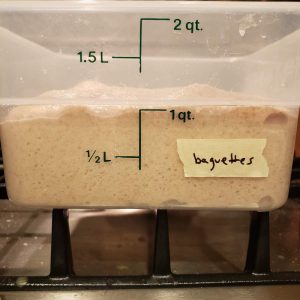 87% hydration dough, expanded about 65% during the bulk fermentation 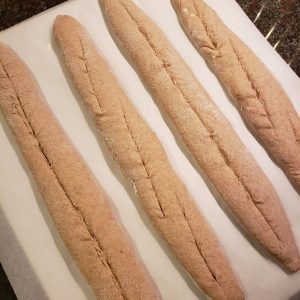 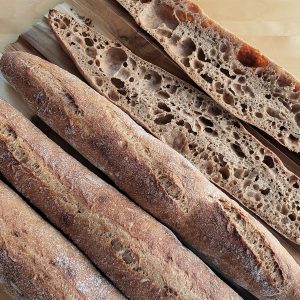 I kept the hydration high at 87% for this batch, and again let the dough expand by about 65% during the bulk fermentation. However, I preshaped the dough, which added tension to the dough shape. These baguettes were similar to bake #3 with a good balance of score bloom and crumb openness.

Just kidding. Well… kind of. I actually was going to do a sixth round but after I had already made the dough, I decided that round 5 was really perfect as-is. So what to do with that dough… 🤔 Check out our Whole Grain Sourdough Pizza. 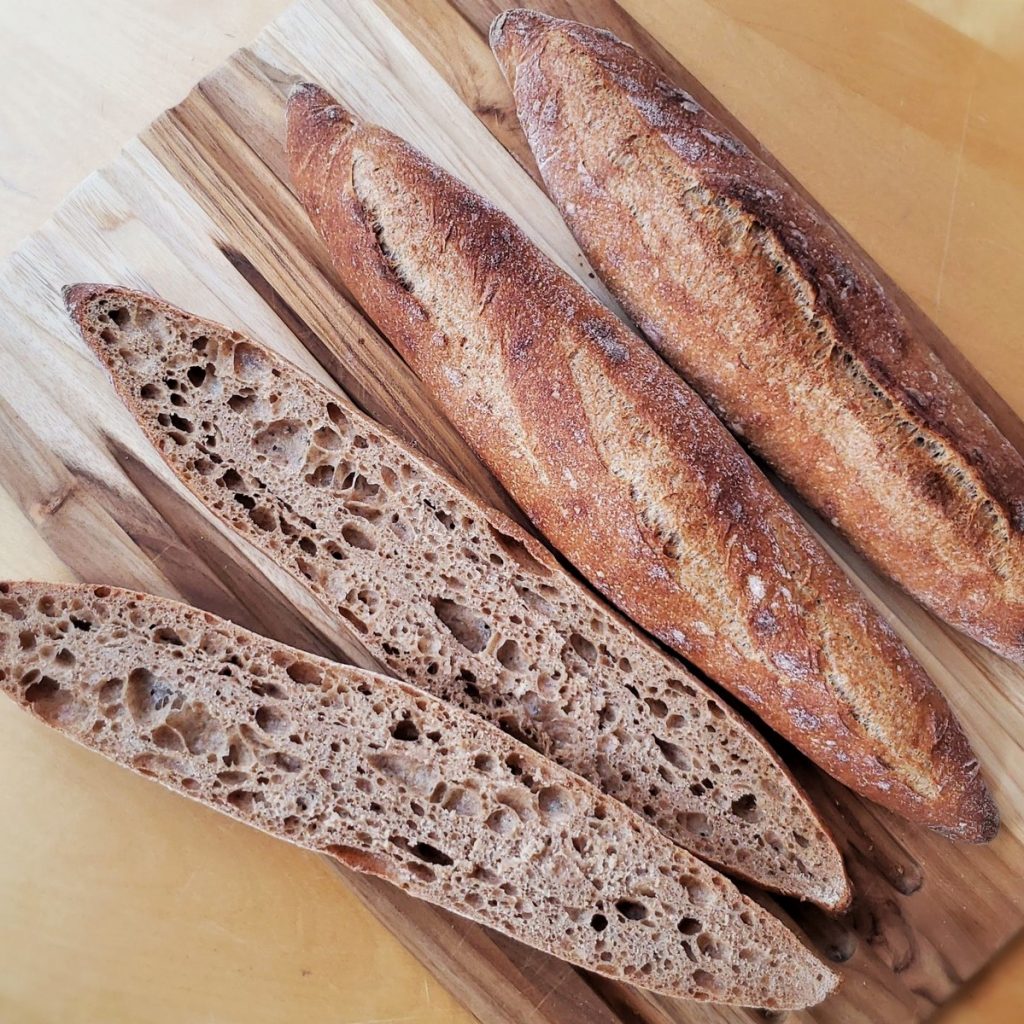 These whole grain baguettes defy refined-flour baguette tradition and challenge all expectations of how a fiber-full wheat flour should behave. They’re full of air pockets and tender chewiness, with a soft and aromatic wheat flavor. You’ll love these baguettes plain, for making sandwiches, dipped in soups, and as hors d’oeuvres toasts with various spreads.

Gnocchetti and also Cavatelli from a Corn-and-Wheat Pasta