After writing an article on Storing, Freezing, and Mailing Bread, I began to research freezing dough; sourdough in particular. I’d heard it was possible, particularly with pizza dough, but wasn’t sure how well the defrosting and baking would work with larger doughs and what might be the best approach.

Before I dive into the details of each experiment, here’s the dough formula I used and a summary of my tests and results: 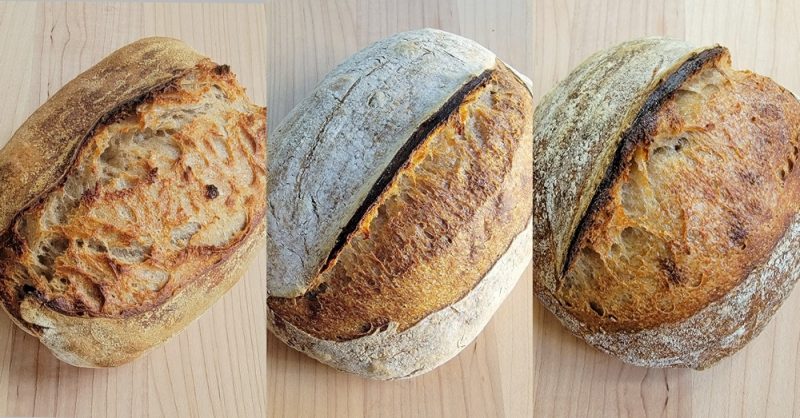 My first test involved treating the dough as if it were a pizza dough. At the end of the bulk fermentation, I divided the dough in two. I froze one dough, and I proofed and baked the other. I took some photos of the bread I baked right away, figuring I’d eventually do a comparison of the two loaves to look for differences. 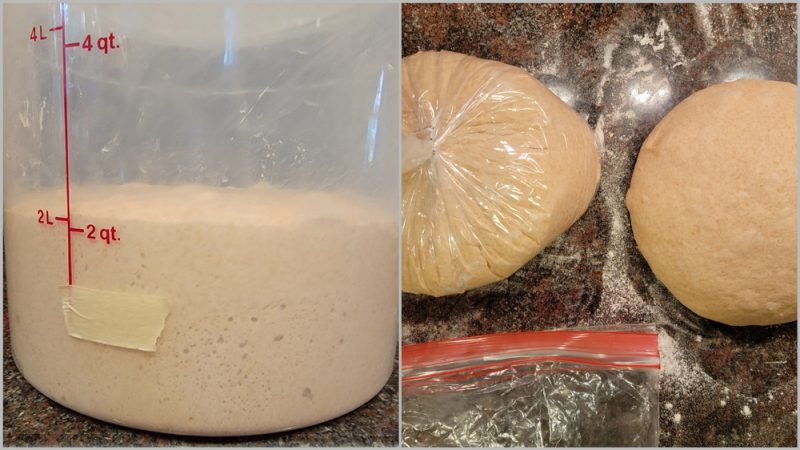 Two weeks after baking the first dough, I defrosted the second dough in the refrigerator until it was malleable (about 24 hours). Then at room temperature, I preshaped the dough and let it rest on the countertop. It spread quite a bit and didn’t show any surface bubbles that would indicate fermentation activity. 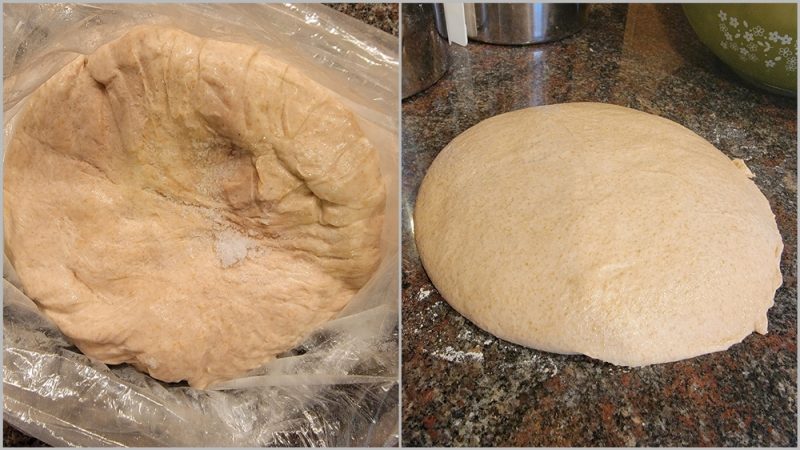 Defrosting in the refrigerator | dormant dough resting on the bench

I shaped the dough and let it proof about 7 hours. It relaxed in the basket but didn’t expand very much. Then it stuck severely to the proofing basket when I tried to flip it out for baking. 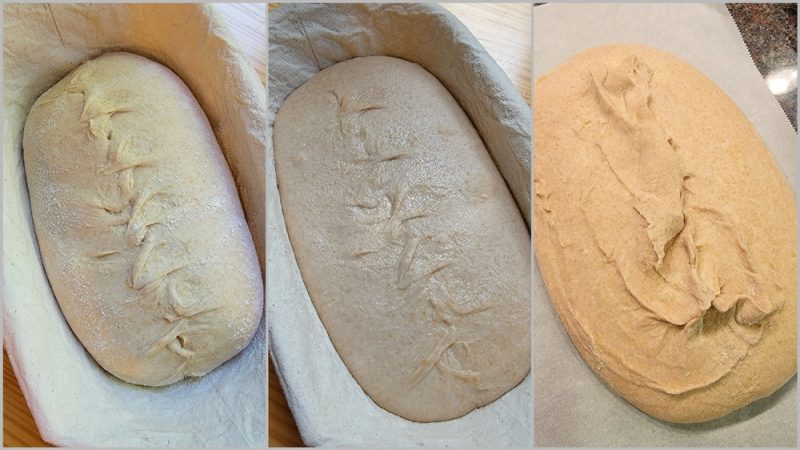 The mangled dough also felt very dense so I decided to shape it again and refrigerate it until the next day. 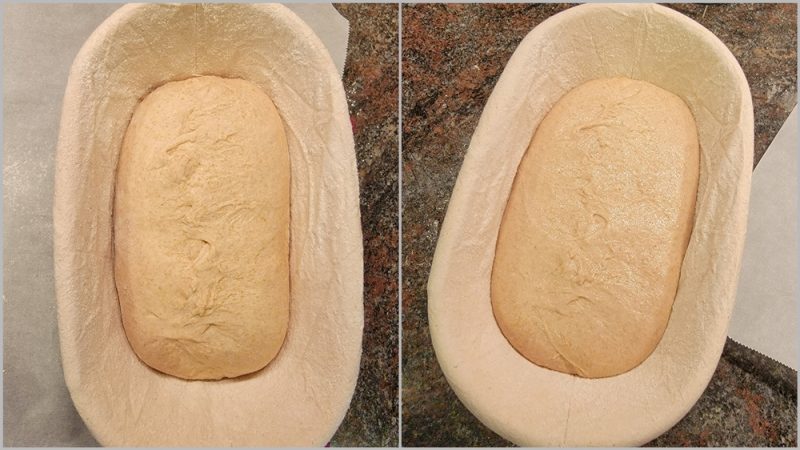 Re-shaped and refrigerated | the next day just before baking

After a night in the refrigerator, the shaped dough still didn’t look active and bubbly, but I baked it anyway. The bread came out awful. Luckily I took a bite out of it on the way to the trash can and realized the flavor was fine for bread crumbs.

I believe the frozen dough was severely de-gassed when I defrosted and shaped it twice, and more importantly, I don’t think the fermentation ever started up again for the final proof. It’s possible the bread would have been okay had I baked it after unsticking it from the banneton, but I don’t think so. I lean toward believing it was dead all along. 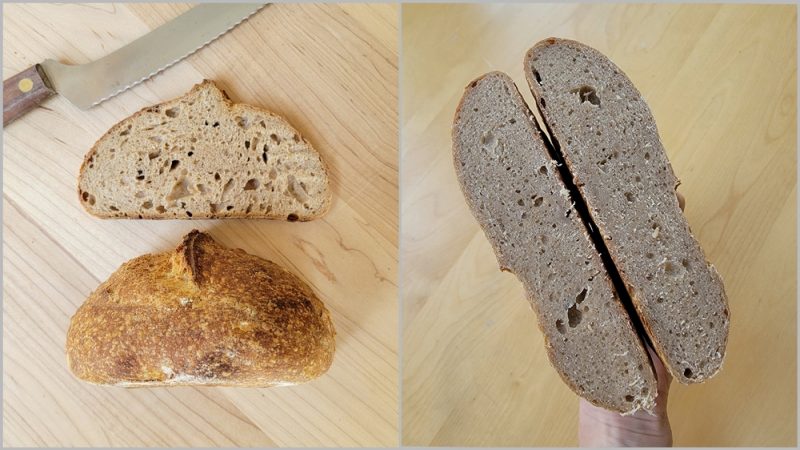 If you look carefully, you can see differences between the never-frozen bread (left) and the frozen-for-two-weeks bread (right) ?

I made a lot of changes to my approach with my next experiment. First, I decided there was no need to bake a never-frozen loaf from the divided dough. My goal was to find a freezing strategy that produced the most edible bread, not see if there were differences between freezing and not freezing.

I also planned to divide the dough into smaller loaves to have a shorter defrosting time and hopefully fewer bread crumbs. I also figured I’d stop the bulk fermentation earlier to have more food left in the dough, and I’d only freeze the dough for one week so the dough would have more microbes still alive once it defrosted. 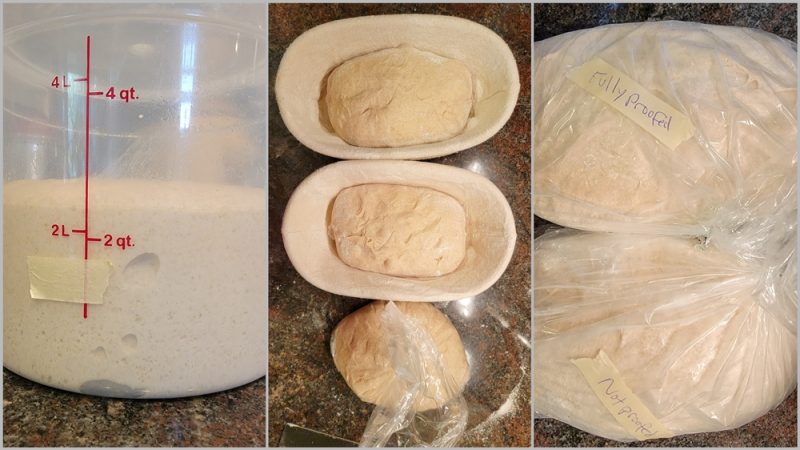 Bulk fermented to only 40% dough expansion; one dough bagged and two doughs frozen in baskets (fully proofed and not proofed) and transferred to bags a few hours later

Shaped, fully proofed, then frozen in the proofing basket. Popped out of the basket and double bagged a few hours later. I left the dough in the freezer for a week. When my oven and baking vessel were preheated, I unbagged the dough, scored it while it was frozen-solid, and baked it immediately. I left the baking vessel lid on for 30 minutes while it was baking in hopes of effectively steaming the crust. (I peeked at the bread after 20 minutes and saw it looked strange.) The crust texture ended up fine, but the appearance was odd. The dough also needed 5-10 minutes extra in the oven compared with the other loaves. 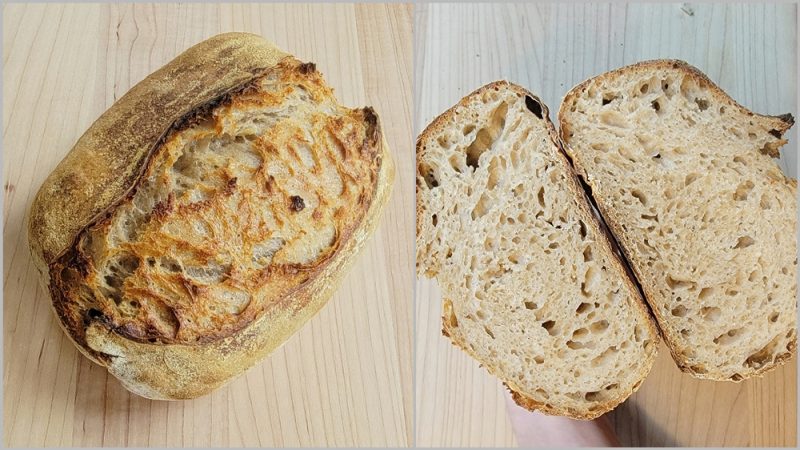 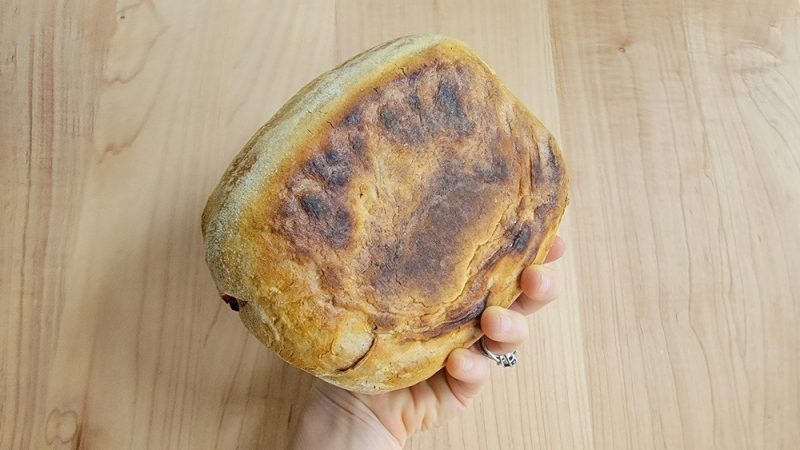 Somewhat strange crust all around

Shaped but not proofed, then frozen in the proofing basket. Popped out of the basket and double bagged a few hours later. I left the dough in the freezer for a week, then I returned it to the proofing basket for defrosting and the final proof, which took about 8.5 hours total. The dough warmed up but not all the way to room temp by the time I baked it. The oven spring and crumb were both good. The crust was very floured due to my fear the dough would sweat while defrosting and stick to the basket. 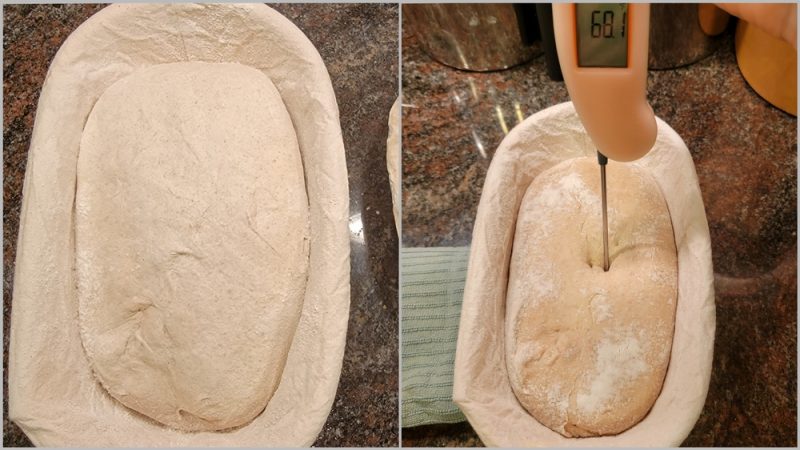 Frozen dough returned to the basket; the dough warmed up and expanded

Pre-shaped then frozen in a bag, similar to my first experiment, only I left more food and microbes in the dough and shaped it very gently. The dough defrosted in the refrigerator for about 20 hours. Once it was malleable, I removed it from the bag, shaped it, and left it to proof for about three hours. The dough expanded and the loaf looked great from the outside, but the results were a little under-proofed and gummy. 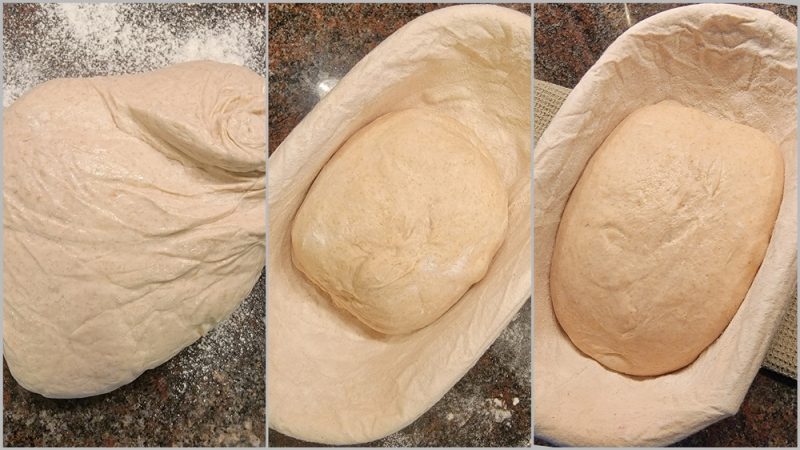 I suspect if I had shaped the dough a little later or proofed it for another hour, the loaf would have turned out better. But it’s also possible that more time wouldn’t have generated more fermentation and structure. I would have to test this again to know for sure. 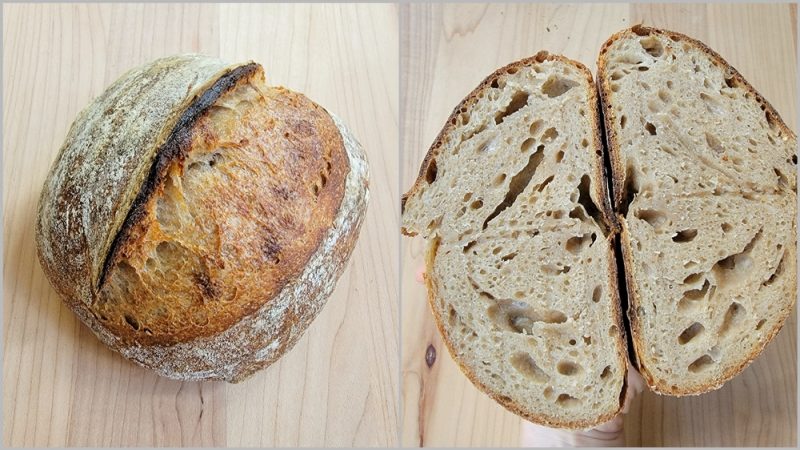 After engaging in these experiments, I’ve concluded that the easiest option is Strategy A, to freeze sourdough at the end of the final proof and bake from frozen, but the most attractive and still somewhat predictable option is Strategy B, to freeze the sourdough after shaping, and bake the dough about 8 hours (longer in cool seasons) after removing it from the freezer. With this latter approach, I left the dough in the freezer for only one week. I’m not sure if longer would be successful because my dough that was frozen for two weeks at a slightly different stage in the process wasn’t revivable as far as I could tell. Strategy C yielded a problematic crumb both times I did it and it took the longest time. Another baker or a third test on my part might make a better loaf with this strategy, but for now I’ve decided it’s too unpredictable and complicated for me.

My overarching conclusion about freezing sourdough, is that it’s simply easiest to freeze the bread rather than the dough.* I recommend baking the dough, freezing the resulting bread, and then defrosting and crisping the bread in the oven about an hour before serving.

*Pizza dough seems to be more resilient for freezing, perhaps because of it’s smaller size. This allows both faster freezing and defrosting. I also suspect the baking of pizza, a flatter bread, is more forgiving for crumb aeration and general appearance.

Melissa Johnson: Dedicated bread baker and experimenter, inspired by the science and art of sourdough.