Tamales are a traditional dish in Mexico, parts of Mesoamerica, and some areas of the U.S. such as Texas. They consist of nixtamalized cornmeal dough or masa, a savory or sweet filling (or combination of both), and a corn husk wrapping. Tamales are steamed for about an hour, upright in a large pot on the stove. You can enjoy them steaming hot but they also keep well and transport nicely in their natural corn husk to-go packaging.

This sweet tamale recipe uses heirloom red corn masa flour (harina) or homemade nixtamal. The fresh and unique corn flavors come through in the steamed tamales and pair wonderfully with both the fig filling and the alternate filling option of raspberries and dark chocolate.

Tamales are often eaten on special occasions, and the Christmas season is one of the most popular times for making them. The elaborate process inspires big batch cooking and tamale-making parties, called tamaladas. As Pati Jinich, chef and host of PBS’s Pati’s Mexican Table, explains in this tamale how-to video, you can’t have too many tamales or too many kinds of tamales. 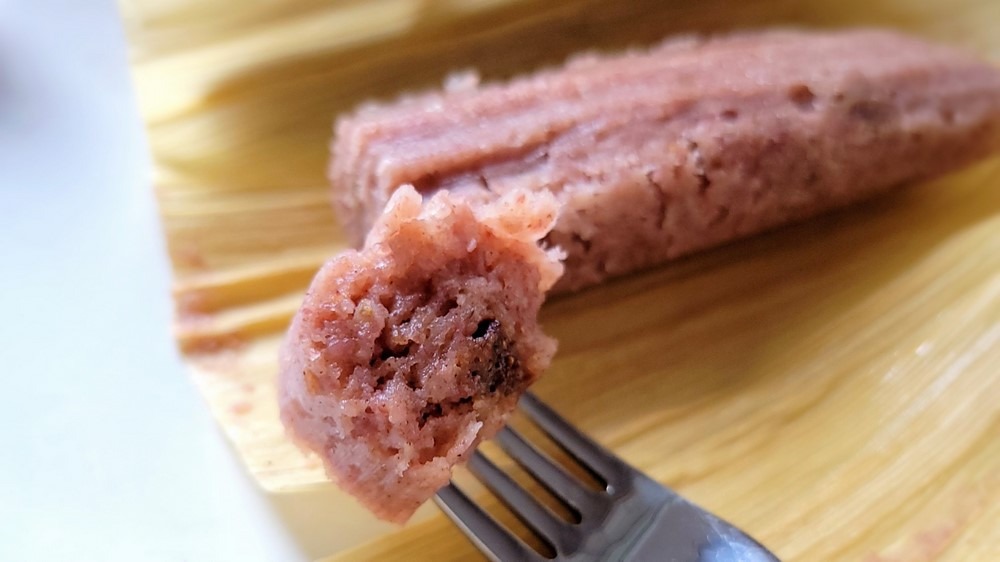 This holiday season, I started making tamales at the urging of Breadtopia’s product specialist, Maria Juarez. When Maria decided to add Masienda’s new red corn masa flour (harina) to our store, she told me I should try sweet tamales made with it using fig jam as a filling. That sounded both fun and delicious to me, so I started practicing with the white masa harina I already had in my refrigerator before the red masa harina even hit our warehouse.

I initially made a batch of savory tamales with leftover Thanksgiving turkey to test masa texture, wrapping approaches, pot size, boiling time, and more. For my tamales rojos, I made a red chili pepper sauce, stewed the meat, created a broth, and whipped up the masa. They were so delicious and worth all the steps; my only regret was not doubling the recipe. Next I ventured into the territory of sweet tamales and quickly realized they’re much easier to make than savory tamales. You simply sweeten the masa with sugar and something delicious like dried or fresh fruit, coconut shreds, jam, chocolate, nuts, caramel–the list goes on.

Sweet tamales are less known in the U.S. but they’re perfect for dessert or breakfast. For one batch, I used Breadtopia’s new red masa harina and for the other, I used fresh-ground pink xocoyul corn nixtamal I made following the simple process in this blog post. Both batches came out great. This was especially exciting because I’d used my food processor to grind the nixtamalized corn. The food processor doesn’t make as smooth of a masa as a Victoria Mill or buying masa harina and mixing it with water. Nonetheless, the texture of the homemade nixtamal tamales was perfect. 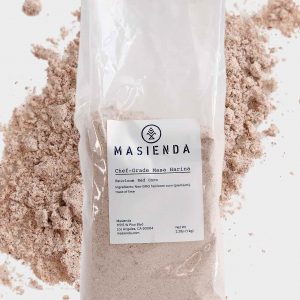 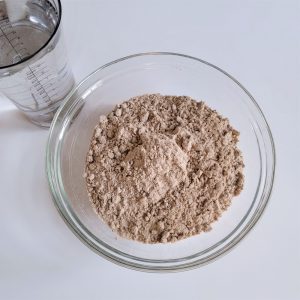 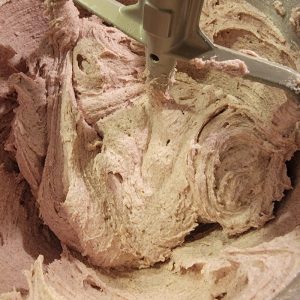 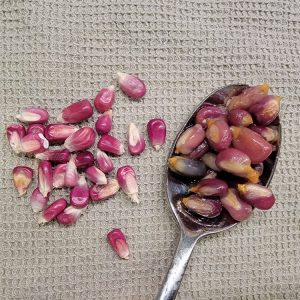 Pink corn, before and after nixtamalization 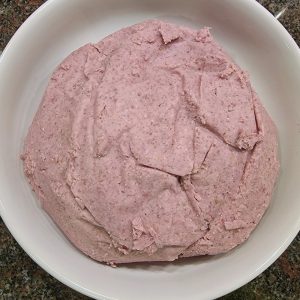 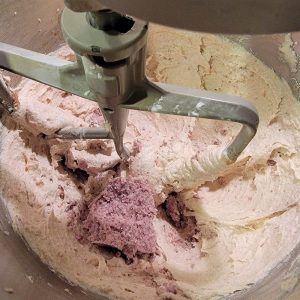 In my research, I found the flour-to-fat ratio in masa for tamales ranged wildly from as little as 25% to about 125% in this recipe on the Masienda website. I settled on 60% (500g masa harina and 300g fat) as this seemed relatively common across recipes in English and Spanish, and it yielded a fluffy tamale. I used a combination of lard and butter for my sweet tamales, but you can use any of the following fats: lard, vegetable shortening, butter, or oil. I haven’t tested making tamale masa with oil, but if you search the internet for vegan tamales, you will find examples of success with it.

My favorite filling was the fig jam suggested by Maria, along with chopped figs for additional bursts of fig flavor. I also made a partial batch of tamales with raspberries and dark chocolate. These were tasty too, and I included that variation below in case you’re craving these flavors.

Make sure you check out the photo gallery after the recipe to see the process for making tamales in more detail.

Soak the corn husks overnight if possible rather than just for an hour or two so they don’t tear when you’re wrapping the tamales. You want about 30 husks to make 16 tamales because some will be used to tie around the tamales, line your pot, and cover the tamales.

For steaming the tamales, I used a 9″ tall by 10″ diameter pot with a lid, along with a vegetable steaming basket. The pot was too big for only 16 tamales, but I added two aluminum foil balls to keep the tamales upright and prevent sagging and bursting.

You can mix the masa by hand as in this tamales rojos video (in Spanish with adequate auto-translate captions) or you can use a stand mixer with the paddle attachment, which is quicker and less messy. Mechanical mixing won’t give you as much sensory feedback on the masa texture, but you can add water slowly and check on the texture periodically. The amount of liquid you add to the whipped fat and masa harina isn’t set in stone. The goal is to arrive at a texture similar to cool buttercream frosting. Like sourdough starter, there’s a float test for masa. If a blob of the masa floats in water, then you’ve likely used enough fat and worked enough air into it.

When filling the corn husks, put the masa more or less in the center of the triangle. This will give you enough of a husk base to fold over and secure the filling, and you can squeeze the filling upward from the center to fill the top of the tube. For wrapping steps, see the photo gallery or the Pati Jinich video that I also mentioned above or this short video I made here:

I recommend tying a corn husk band around each tamale unless your husks are very large and folding results in a lot of overlap. The corn husks stay upright and closed due to a combination of factors: masa that’s not too watery, securely folded corn husks, and packing your pot full. Tying the band around the tamale is quick and acts as extra security. It’s also pretty, and different knots or tying locations can distinguish different fillings.

Corn husks can be purchased at Latin American grocery stores and online. I also tested making tamales in parchment paper in case you can’t access corn husks. One layer of parchment wrapping was too floppy. The tamale collapsed a bit during the steaming process and broke in half when unwrapped. The last photo in the gallery shows this tamale. (It was delicious and had a good texture.) I suggest trying two layers of parchment, though I didn’t get a chance to test it myself.

Finally feel free to divide the masa and create a couple of flavors of sweet tamales. You can leave the fig jam out of the masa until after it’s divided, though I suspect it would be tasty in the raspberry chocolate tamales too. Of course, make sure you also halve the amounts of the filling ingredients. 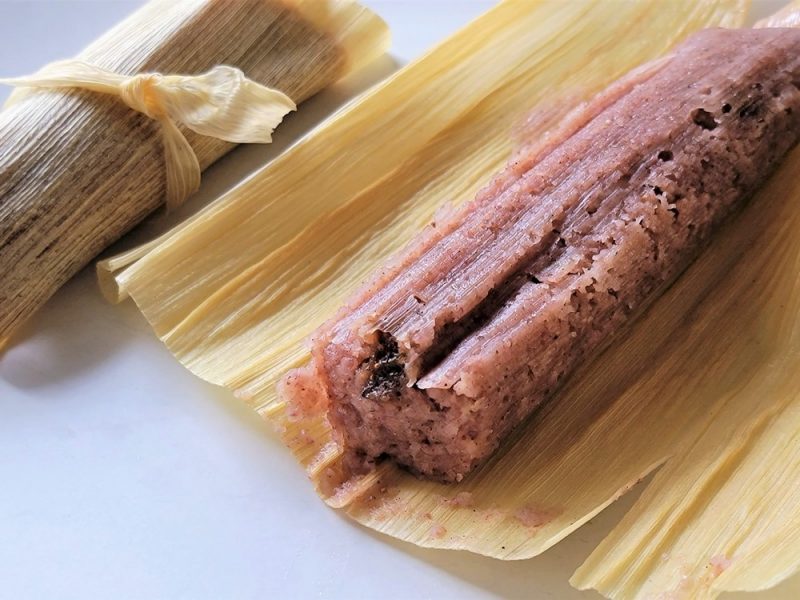 Sweet tamales are a unique, delicious, and a fun project for holiday desserts or breakfasts. Using fresh red corn masa flour or homemade nixtamal, the flavors of heirloom corn come through beautifully and compliment the two filling options suggested below: fig jam and dried figs or raspberries and dark chocolate.