This traditional Easter pie from Naples is unlike anything I’ve ever made before and I love it. It’s a cheesecake and a grain pie, and it’s infused with orange and lemon throughout. A friend sent me a link in February to the Giallo Zafferano video recipe, which comes from Gran Caffè Gambrinus in Naples, and I’ve been practicing at it and learning about it ever since. My first thought was that if wheat is delicious in pie crusts, it must be delicious in the filling too, and with citrus and ricotta? Sounds lovely. I also figured that if this Neapolitan dessert was anywhere near as amazing as Neapolitan pizza, then it had to be worth learning to make and sharing with the Breadtopia community.

Pastiera Napoletana is traditionally started midweek before Easter, with the first step being several days of soaking wheat and changing the water. The ingredients and multi-stage preparation have religious symbolism and likely date back to Greco-Roman mythology as well. You can learn more about that in this Wikipedia article. I don’t follow the slower prep schedule, apart from doing some important steps the day prior to baking to give the crust dough, ricotta-sugar, and wheat berries time to hydrate. I also recommend serving the pastiera the day after you bake it, so that the aromas and flavors are richer. If you’re going for an Easter dessert, that means starting Friday night.

My reading of English and Italian recipes indicated that most people nowadays buy pre-made cooked wheat in a jar, but I was excited to make grano cotto  from scratch. I wanted the freshness and I wanted to remove any barriers for people who don’t have a local Italian grocery store.

My hope with this recipe is to add a step back to the process and use flavorful whole grain flour in the crust, all while convincing you that Pastiera Napoletana doesn’t deserve the “difficult” rating given to it by the Giallo Zafferano website. I also tested and dropped the sugar in the filling by almost half, which wasn’t something I planned but simply preferred. 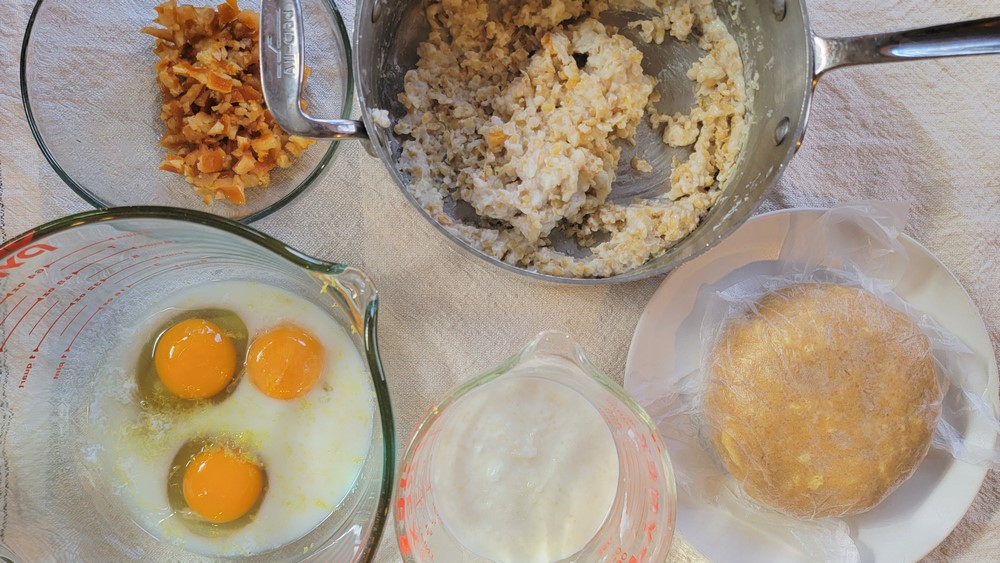 Making the grano cotto or cooked wheat was initially the most difficult part of Pastiera Napoletana. For my first attempt, I cooked the wheat berries until they were plump and tender, then I made the wheat cream by simmering the cooked wheat again in milk and butter. This made the wheat even softer, but to my surprise, when the berries baked in the filling, they actually regained firmness. The extra chewy wheat berries weren’t unpleasant, but I definitely wanted them to be less toothsome.

With more reading, I learned from an Italian blog that the wheat must be “destroyed” by the cooking process. Increasing the initial boiling time of the wheat berries to about two hours achieved this. Of course, you can immersion blend less-boiled wheat berries if you’re in a rush, but with a long simmer, you’re more guaranteed a soft filling.

At one point, I actually bought grano cotto per pastiera (cooked wheat for pastiera) so I’d have a better sense of how much to cook the wheat. Incidentally, the Italian grocery store where I bought the grano cotto sold little tubs of peeled wheat berries next to the jars. I stuck with my unpeeled berries though, because I’m a fan of the fiber and nutrients in bran. 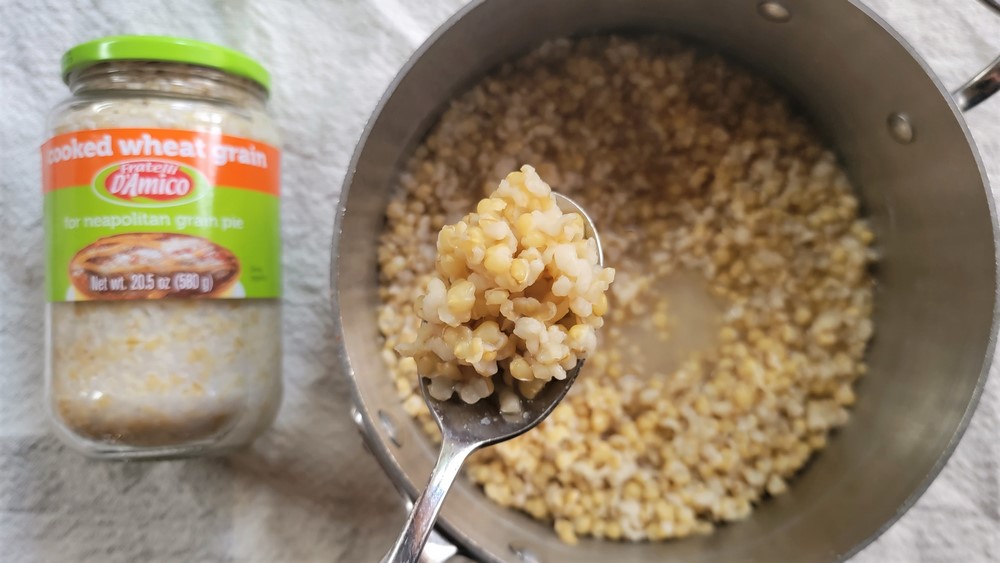 Soaked and then simmered wheat berries, still a little more intact than the jarred product.

In my final pastiera, I used the soft white sonora wheat, but you can use other wheat varieties. Simply make sure they are broken open by the end of the boiling. I soaked the berries overnight and then simmered them for 1 1/2 to 2 hours the next morning until their fluffy white interior was visible and significant water had been absorbed. Soft white winter wheat and pima club wheat will perform like white sonora, while a hard wheat like durum will take significantly longer to soften, likely warranting the traditional three-day soak.

Boiling wheat made my kitchen smell amazingly delicious, almost like honey, and didn’t require much oversight apart from occasionally making sure the boil stayed at a simmer and the water didn’t evaporate. The final grano cotto should have some wateriness to it, just like the jarred product. This will also keep it hydrated if you make it ahead. My wheat berries increased in weight by about 5x.

In the photo gallery at the end of this recipe, you might notice I boiled extra wheat berries. I used half for the pastiera and half for a delicious breakfast porridge, which I plan to make regularly. 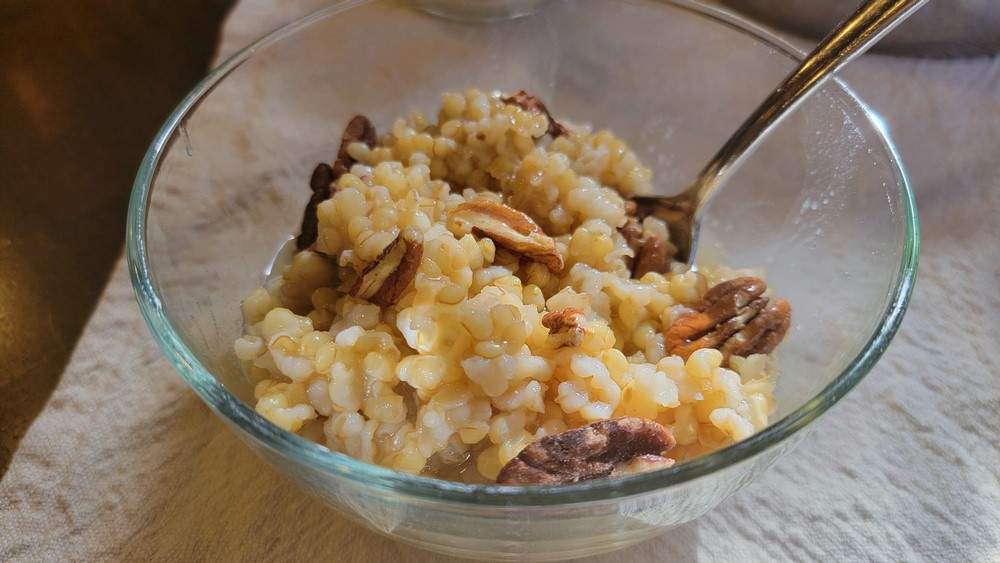 Breakfast of homemade grano cotto with honey and pecans

I diverged the most from tradition here. Pastiera Napoletana filling is usually very sweet and it’s made with sheep’s milk ricotta. I used cow’s milk ricotta (full fat) and I reduced the sugar in the recipe by almost half. The Giallo Zafferano recipe uses 180 grams sugar. In my first bake, I used 140 grams and in the next bake, I dropped it further down to 100 grams. I found it to be quite sweet still, but you can be more traditional and add back some of this sugar if you want.

Remember that resting the sugar and ricotta mixture for an hour to overnight is important for the final texture and cohesiveness of the pastiera filling.

Traditionally, the fat in pastiera crust is lard or a mix of lard and butter. The recipe below uses just butter, but you can use whatever you prefer. The strips of dough on top of the pastiera supposedly depict window grates in Naples, called gelosie. And it’s said there are seven strips because of the seven decumani in Naples. From what I can glean, decumani are roads that run east-to-west. Note that the stripes are placed four below and three on top, rather than a weave. 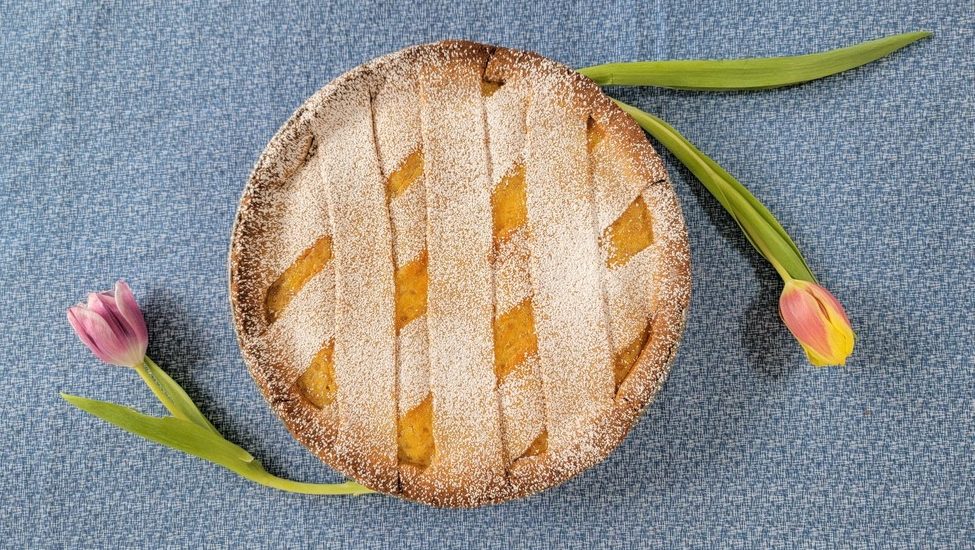 Rolling out whole wheat flour shortcrust pastry is not as easy as refined “white” flour pastry. In my experience, whole wheat pastry requires deft hands, plenty of flour, and a bench knife. Once in place, the strips are virtually impossible to move without them breaking. If you’re new to pie baking, you might use all purpose flour instead (the same amount). High extraction flour or a mix of all purpose and whole wheat flours are good intermediate options.

A very important step for any shortcrust pastry or pie crust, but especially for one made with whole wheat flour, is to let it rest and fully hydrate in the refrigerator, ideally overnight.

You can buy citron at most supermarkets, though it’s usually more prevalent in November and December during fruitcake season. If at all possible, I recommend you buy some oranges, eat them, and save the peels in a bag in your refrigerator until you have a critical mass. Then you might follow this recipe in the Breadtopia forum by Khasidi. Here is a recipe for candied squash, which is also traditional in this dessert and near impossible to find outside Italy. 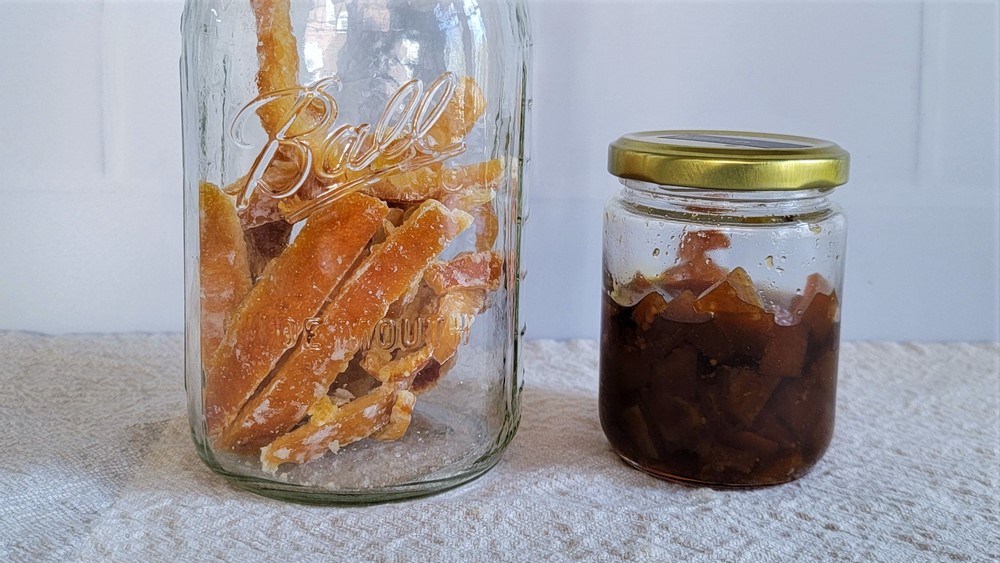 Two ways to store candied peel indefinitely: dried or in sugar syrup. Chop and hydrate your candied peel if it’s dry like the one on the left

Traditional pastiera pans are 8 inches at the base and fluted. I used a 9-inch cake pan (2 inches tall) and found it worked well. Most pie pans would be too shallow for this quantity of crust and filling. Some people prefer to make Pastiera Napoletana in a 10-inch springform pan. If you want to do this, double all the ingredients in the recipe below, and bake for 90 minutes at 340F.

From this Serious Eats recipe, I learned that using candied squash or zucca candita is a traditional Pastiera Napoletana ingredient in addition to or instead of citron. I also read that some people put ground cinnamon in the filling. Pearled (bran removed) barley or farro are sometimes used instead of wheat and will cook faster. The big takeaway from my reading is that Pastiera Napoletana is a home baker’s specialty with centuries of traditions that are individual to families. If you like the idea of this pie, you might start with my variation but you should make it your own as well. 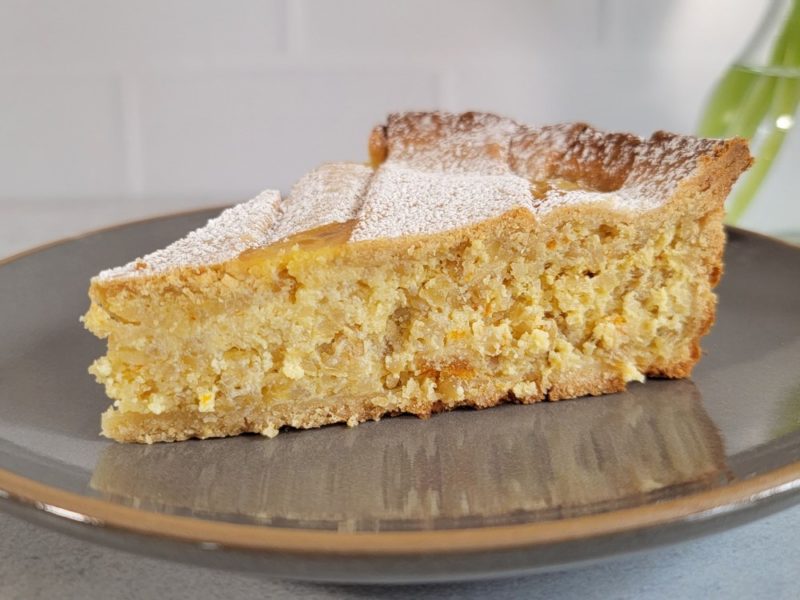 Pastiera Napoletana is a traditional Easter pie from Naples, Italy. It’s delicious, unique, and beautiful, and can be enjoyed any time of year and for any occasion. This dessert is made with cooked wheat berries, ricotta, and citrus of various forms: zest, blossom water, candied peels. The recipe shows you how to make cooked wheat or “grano cotto.” You have the option to use a soft whole white wheat flour in the crust and significantly less sugar in the filling. (Don’t worry, it’s still plenty sweet.)