Oat porridge sourdough bread has a custardy soft crumb and smidge of oat sweetness. Recipes for this bread abound throughout the baking world—there’s even one in the sourdough book Eric and I wrote—but they tend to use all or mostly all refined flour. You don’t see very many recipes that use only whole grain flour. The thought process behind this was, at least in our recipe, to compensate for the weight and gluten disruption of the oat porridge and keep the bread from being too dense.

Well, it turns out that an all whole grain flour oat porridge bread doesn’t have to be dense at all. In fact I even used butter and milk in the porridge, ingredients also known for slowing down gluten formation, and the dough was still fairly strong and the crumb open. 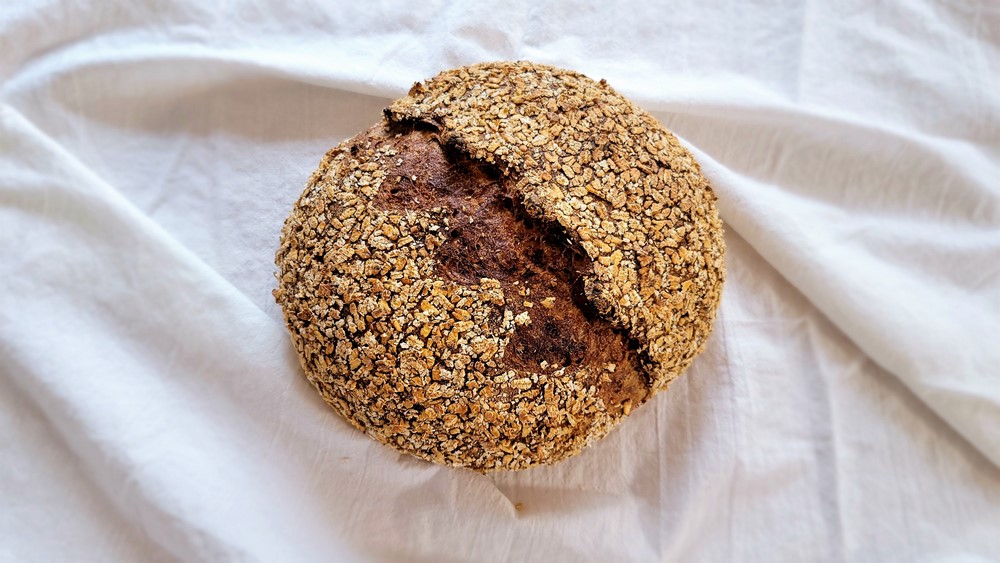 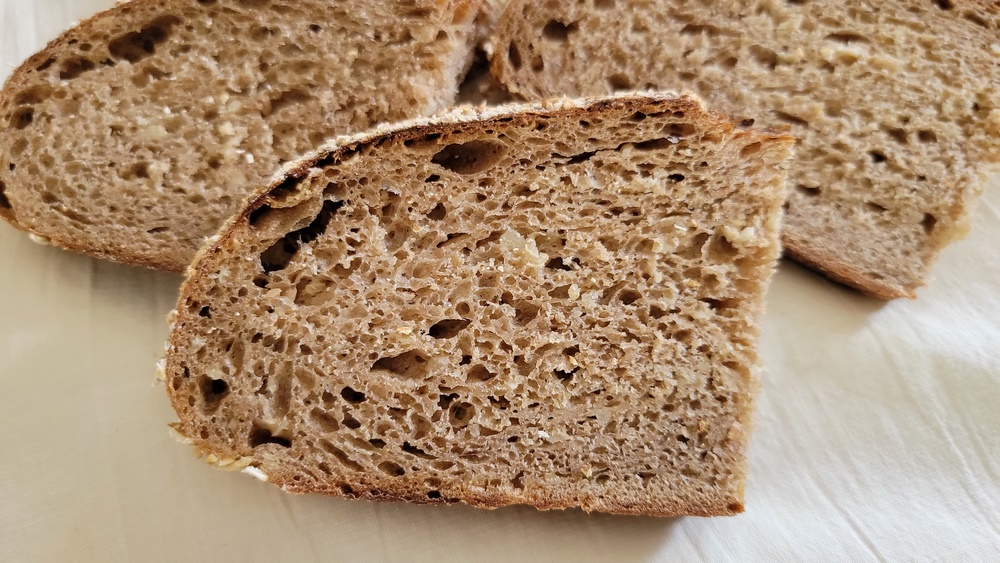 Tender, tasty, and fiber rich; delicious dipped in soup, for sandwiches, and toast

To achieve this relatively airy bread, I used a strong wheat variety, yecora rojo, and I let the gluten develop in the dough for a little over an hour before laminating in the porridge. The porridge was cooked with the milk and butter, rather than these ingredients being added to the dough. I followed up with a couple of rounds of stretching and folding, and this seemed to allow the dough and porridge to combine “just enough” so there were no big lumps of porridge, but the porridge wasn’t completely incorporated into the dough either, which would have disrupted the gluten structure. 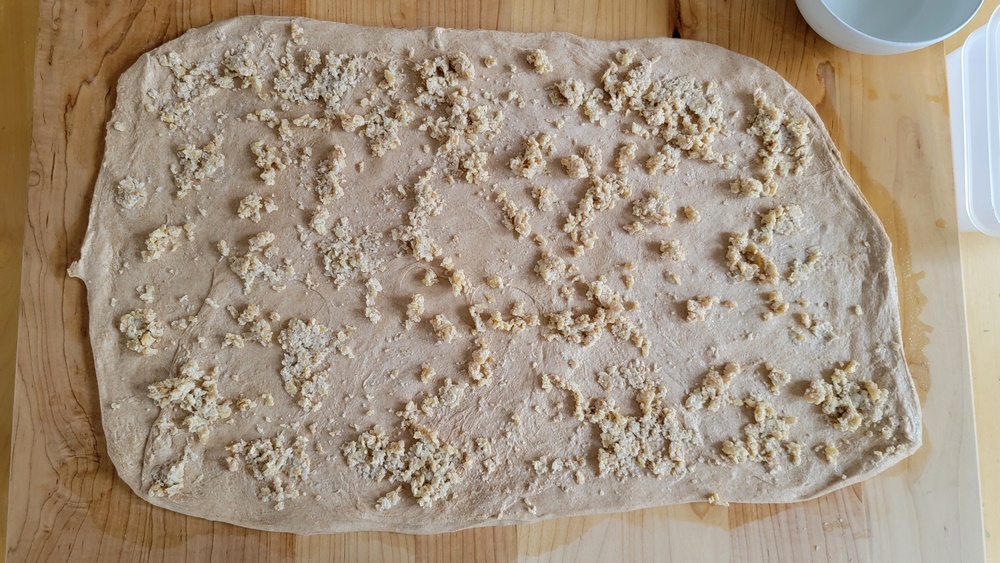 Oat porridge is rolled into the dough, and further distributed during two rounds of stretching and folding 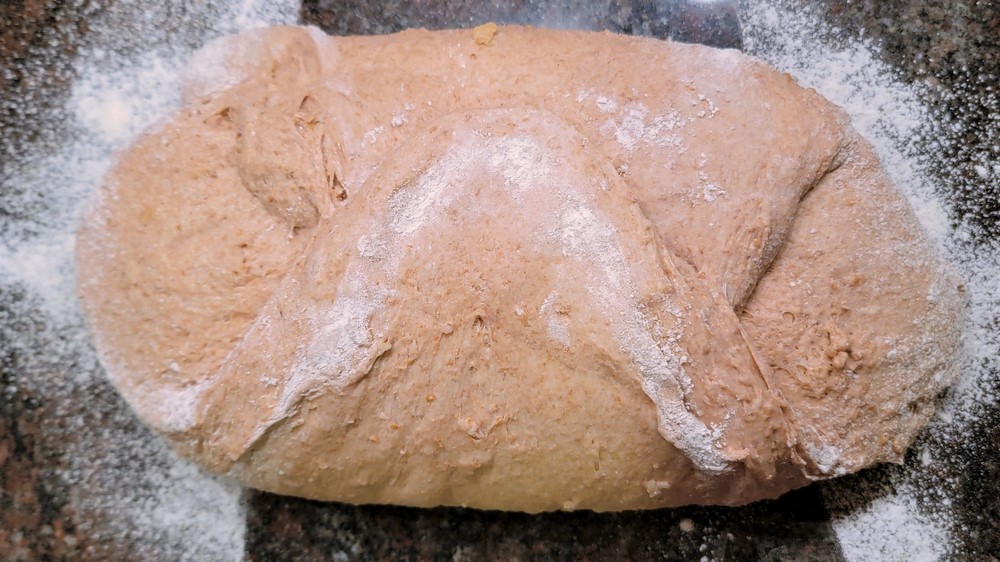 I used a mix of flaked oats and flaked wheat berries for the porridge because I have the new Mockbake Flakelovers Flaker and can flake almost any seed or grain. You can use only rolled oats for your porridge if you prefer. Moreover, you may want to make your porridge with water only and no butter and milk, which is also fine. Simply aim for the porridge consistency you see in the photo gallery after the recipe. 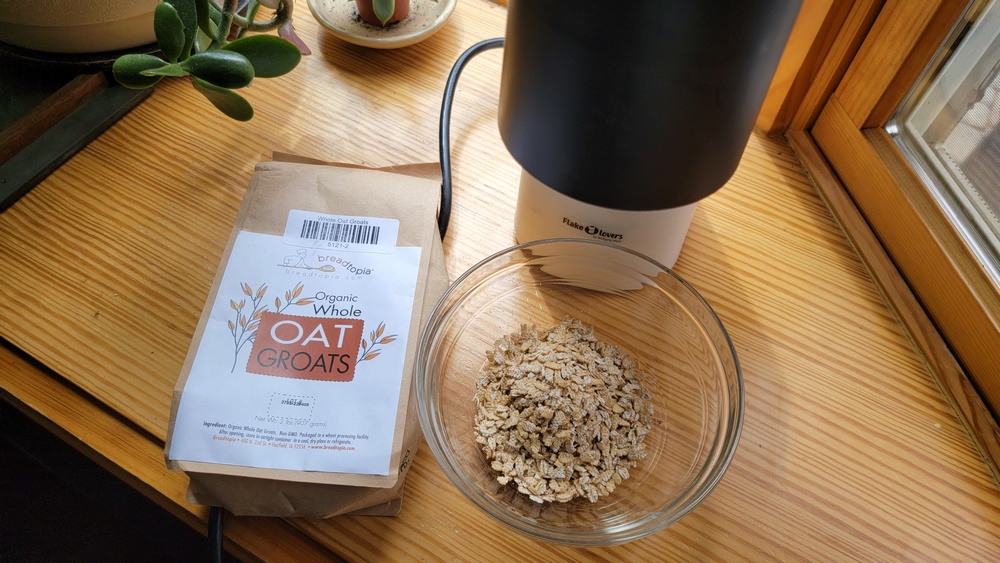 This bread isn’t particularly sweet apart from the slight nutty sweetness in the oats. I think adding a tablespoon of honey or maple syrup to the dough would be delicious. If you do this, then subtract 15 grams of the water in compensation. You can also reduce the light sourness of the bread’s flavor if you shorten the final proof by doing it all at room temperature, rather than doing an overnight refrigeration.

I baked this bread in Breadtopia’s Hearth Baker, which allows a dough to splay open as it bakes, but you can choose a different shape for your dough or a different baking vessel if you want one with side support (e.g. the Round Cloche or Oblong Baker). Making the dough a little dryer and proofing less will also result in a taller loaf but with a tighter crumb—a trade-off I didn’t want to make. 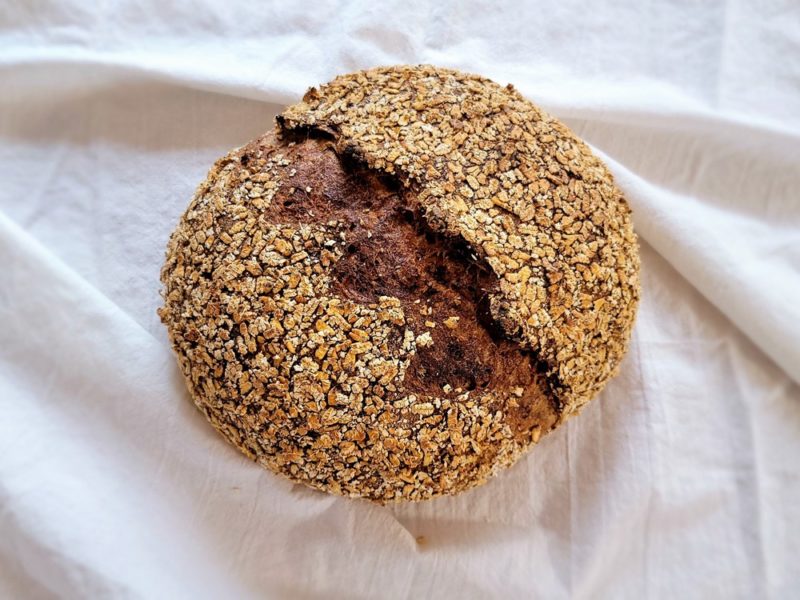 Oat porridge brings a custardy tenderness to the texture of this 100% whole wheat sourdough bread. The slightly sweet oats are in harmony with the red wheat flavor of yecora rojo wheat, which has enough gluten strength to keep the bread airy despite being porridge heavy and whole grain all the way.

Greggs reveals vegan cheery bake for Christmas 2021 888011000 110888 < img alt =" Greggs Festive Bake as well as Vegan Festive Bake" src=" https://d3rctclhuobtt7.cloudfront.net/Pictures/480xany/4/8/0/247480_greggsfestivebakeandveganfestivebake1_339772.jpg" dimensions =" (max-width: 1023px) 100vw, 780px" course= "lazyload" size=" 1920 "elevation=" 1080" srcset= ” https://d3rctclhuobtt7.cloudfront.net/Pictures/480xany/4/8/0/247480_greggsfestivebakeandveganfestivebake1_339772.jpg 480w, https://d3rctclhuobtt7.cloudfront.net/Pictures/600xany/4/8/0/247480_greggsfestivebakeandveganfestivebake1_339772.jpg 600w, https://d3rctclhuobtt7.cloudfront.net/Pictures/780xany/4/8/0/247480_greggsfestivebakeandveganfestivebake1_339772.jpg 780w “> Greggs is presenting a vegan version of its popular Festive Bake ahead of Christmas this year. Because of go on sale across the Greggs UK estate on 4 November alongside the original version, the vegan bake is filled with Quorn mycoprotein pieces, sage & onion stuffing, and a vegan & bacon crumb, do with a sage & cranberry sauce enclosed in puff bread. The original, meanwhile, is filled with pieces of hen, sage & & onion stuffing and sweetcure bacon, in a creamy sage & & cranberry sauce as well as encased in crumb-topped pastry. Both have an rsp of ₤ 1.60. Both will be available to purchase in store or can be bought for Click & & Collect through the Greggs’ internet site or Greggs App as well as for distribution by means of Just Eat. ” The Festive Bake is the current iconic Greggs Bake to get a vegan-friendly transformation, and it maintains all the classic Christmassy flavours of the original,” stated Hannah Squirrell, customer supervisor at Greggs. “There’s nothing better over the festive period than tucking right into scrumptious Christmas food, and we’re confident that clients will certainly enjoy our latest tasty bakes.” The current enhancement follows in the footsteps of various other Greggs savoury pastries which have actually had vegan-friendly versions presented, including the Vegan Sausage Roll which made its launching in 2019, complied with by the Vegan Steak Bake as well as lately the Vegan Sausage, Bean & & Cheeze Melt. Taking a look at more diversification of its array and service model, Greggs has actually just recently revealed its purposes to discover the ‘considerable opportunity’ presented by the night daypart as it wants to replicate its success beyond conventional trading hrs. It is likewise seeking to expand its UK estate, which presently sits around 2,146, to a minimum of 3,000 with a rise of 150 each year from 2022. Looking additionally ahead, CEO Roger Whiteside just recently said he really did not know what the final number of stores– also called ‘peak Greggs’– would be.