Fugazzeta is a stuffed pizza from Argentina. I’ve been wanting to make it ever since I saw it featured in the Bueno Aires episode of Netflix’s Street Food Latin America. Fugazzeta has copious amounts of cheese between two layers of dough, with caramelized sliced onions on top. It’s the double-crust offspring of fugazza, an onion pizza invented around 1900 in Argentina by Augustín Banchero and considered a melding of the cuisines of Argentina, Italy, and Spain.

Fugazzeta is very much a celebration of cheese. My version below is quite cheesy but still a far cry from versions where you might see an inch or more of melted bliss. From the get-go, I also added nigella seeds to the cheese layer to give it more dimension. I was inspired by the Lebanese string cheese that I used in my first fugazzeta. Provolone is a more classic second cheese choice, but you should, of course, experiment with your own cheese and filling preferences. Finally, ham is a common filling, though I went with chopped spinach for my more elaborate fugazzeta and will probably use mushrooms in a future bake. 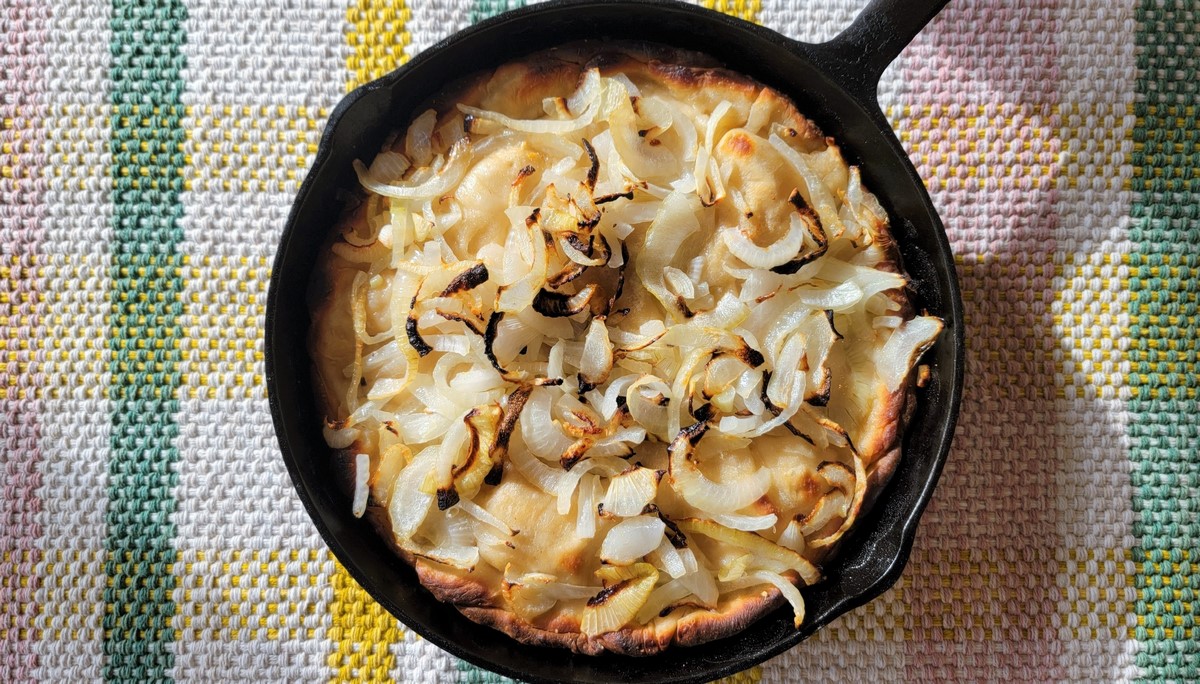 The dough in this recipe is my variation on The Spruce Eats fugazzeta dough. I changed it to be sourdough-leavened, slow-fermented, and gave it an ancient grain / golden wheat aspect, but I kept the two teaspoons of sugar and the quarter cup of milk. You can omit the sugar and substitute in water if you want a more simple dough. Interestingly, in this fugazza dough recipe (in Spanish), you’ll find a 50:50 mix of fine semolina (rimacinata) and strong white flour, indicating that my interest in adding a golden wheat is perhaps not uncommon. The Argentinian recipe also uses milk and a small amount of sugar. 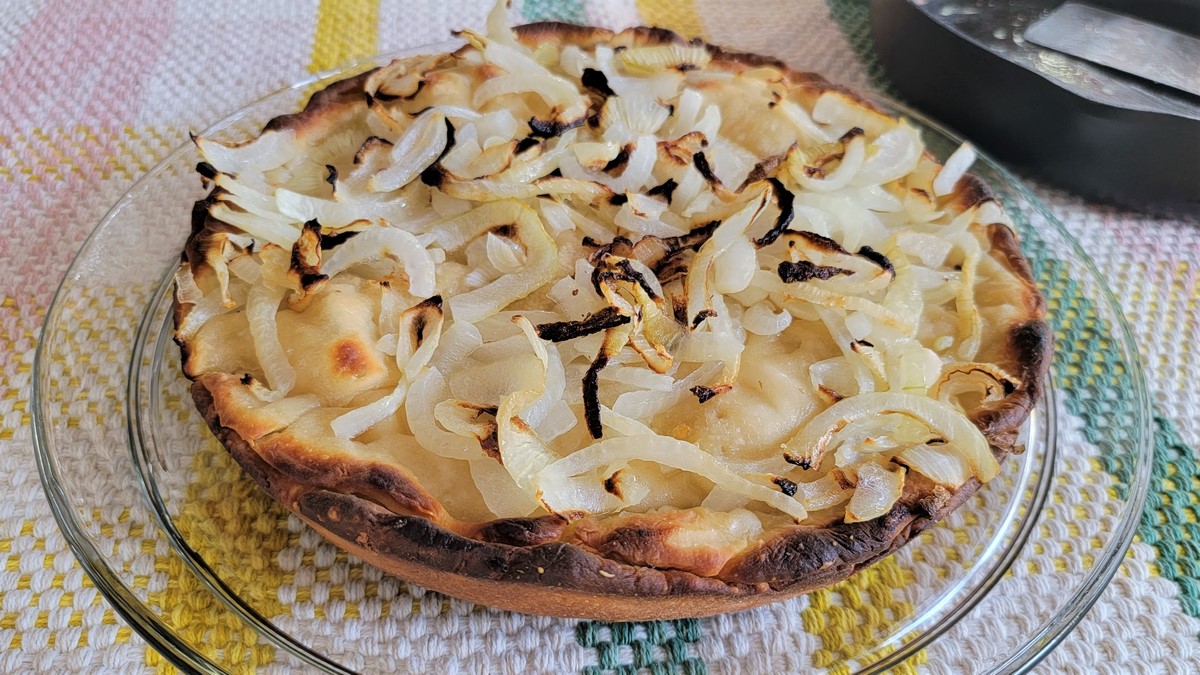 My final fugazzeta lacked sourness despite spending multiple days fermenting, and that could be partly from the extra ingredients, partly from the tiny amount of sourdough starter I used, and partly from the khorasan wheat in the dough. If you want a faster or more sour fugazzeta crust, you can play with these variables: substitute out the milk for water (faster, less sweet), take 30g each of the flour and water from those dough ingredient amounts and use them in the form of an additional 60g sourdough starter along with the recipe’s original amount of 10g starter (faster), and/or try a different second flour (possibly more sour). 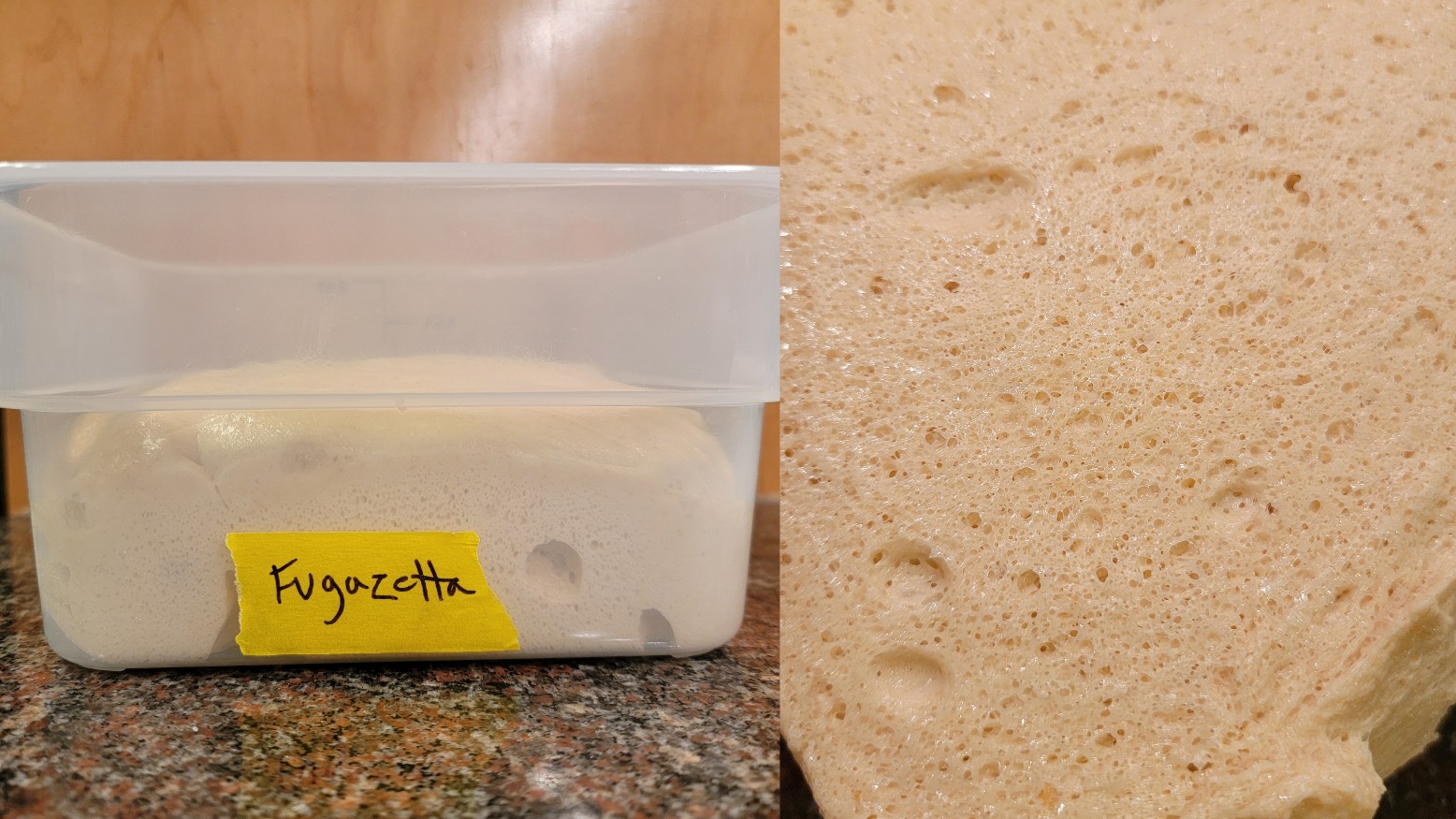 Two-day refrigerated dough with lovely fermentation. See the Photo Gallery below the recipe for pics of another dough, fermented further, that also turned out nice.

I love to mix doughs like this (fugazzeta, pizza, or stromboli) later in the week with whatever starter I have on hand, possibly unripe, and let them rise partway at room temperature. When the dough is anywhere from 25-75% expansion, I refrigerate it until the weekend. This low-key approach allows me to plan for a weekend dinner but not commit to the exact day until a few hours before — and I have the dough mostly ready to shape.

Homemade fugazzeta can be baked in a cast iron pan or deep dish pizza pan, and the timing depends somewhat on your oven features, pan thickness, and filling choices. I developed this recipe with a 10″ cast iron pan and an oven that can broil at lower temperatures (425°F). If your oven can only broil at 500°F, you might do the broil portion with your pan on the lowest shelf and keep a close eye on the onions to watch for scorching. 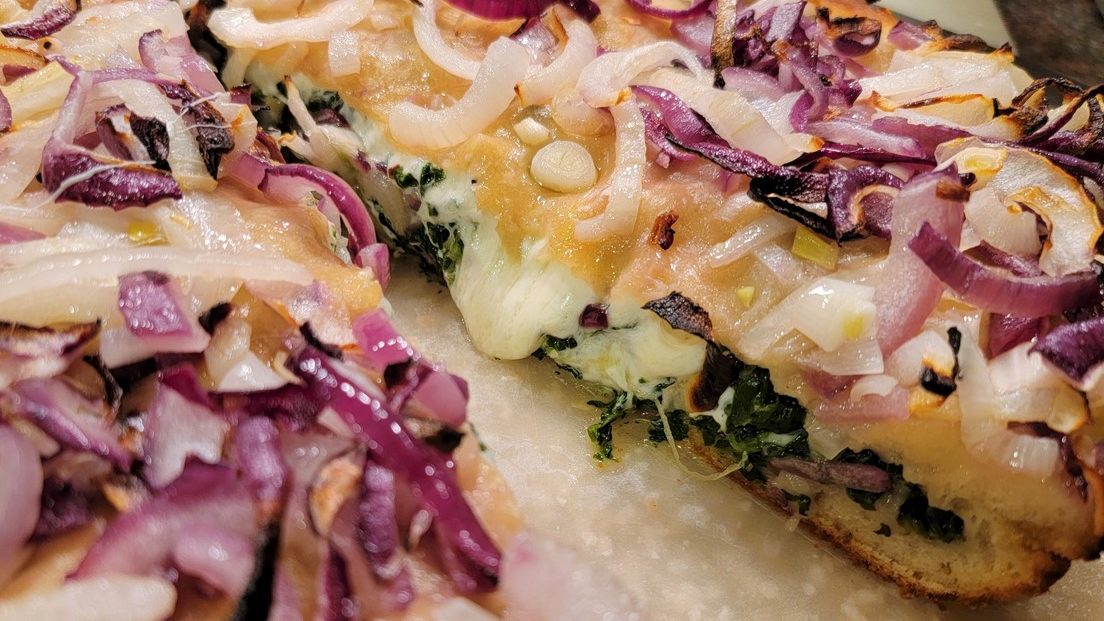 More colorful fugazzeta with two types of onion, mozzarella and spinach inside. The dough was made with tipo 00 strong flour and home-milled whole grain khorasan flour.

My fugazzeta with spinach and extra onions needed to cook about 10 minutes more than the the simpler one, and I even resorted to moving the onions to the periphery of the dough for that time to get the center of the dough nice and golden. For both fugazzetas, I slipped a baking sheet under the cast iron pan at the 25-minute mark to prevent the bottom from getting too dark. Some of my baking strategy came from this Gluten Morgen video though I used a lower oven temperature and no pan cover — less cheese too. 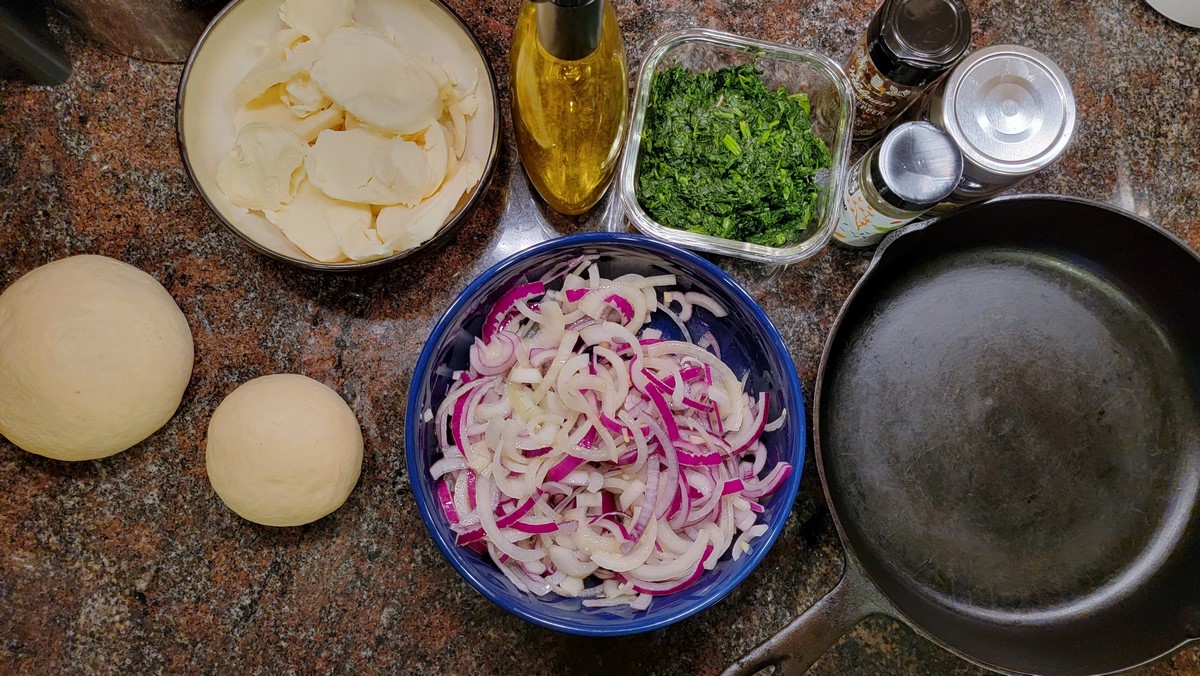 Make sure you check out the Photo Gallery below the recipe for visual instructions. 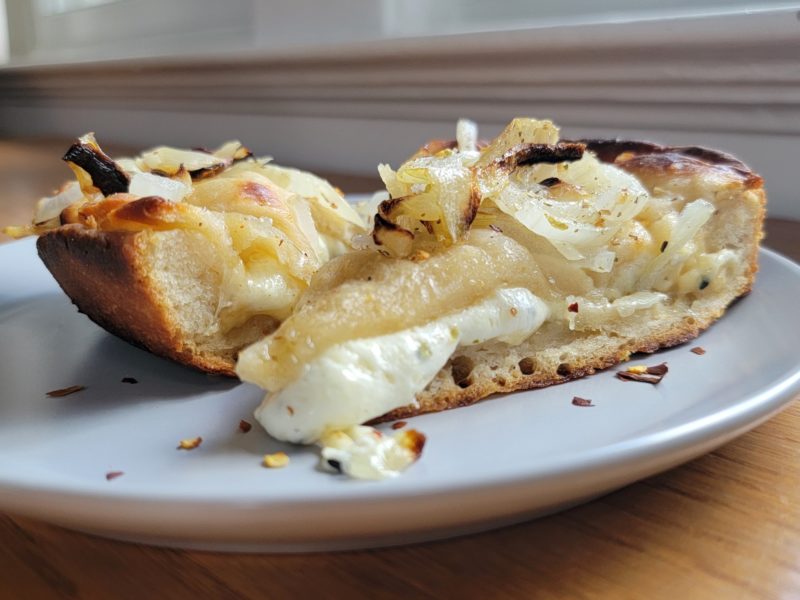 Fugazzeta is a scrumptious cheese-stuffed pizza from Argentina that’s topped with caramelized onions. This recipe’s sourdough crust has two types of flour and a low-key, lengthy fermentation where you mix several days prior, refrigerate the dough when it’s risen partway, and assemble and bake when you’re in the mood. Same-day fermentation and flour substitutions are fine too, as well as fillings like vegetables, meats, and different cheeses. Aim for a hand-kneadable dough, and vary the bake/broil time if your fugazzeta is significantly more or less filled.