Loosely speaking, scalding is a technique involving cooking a portion of the flour for a bread dough with relatively high hydration at a specific temperature which creates a gelatinized starch which can hold a lot more water than a normal bread dough mix. It also induces chemical reactions that create a sweeter flavor and make the bread more easily digestible.

Scalding has been a part of bread baking for a long time, particularly in Northern Europe and Russia, and often involving rye flour. This article, passed to me by @corvus.corax, gives a thorough analysis of types of scalds and the science behind them. Moreover, many bakers have heard of Japanese milk bread with yu-dane or tangzhong, a small portion of the flour that is pre-cooked with milk or water to the point of gelatinization and added to the dough. The resulting bread has a softer texture and a greater resistance to staling, most likely because the tangzhong allows the dough to hold more liquid without feeling over-hydrated. We’ve posted several recipes using this technique: Sourdough Hokkaido Milk Bread with Tangzhong, Whole Wheat Sourdough Hokkaido Milk Bread, Japanese Milk Bread (Yeast Version).

Recently a friend sent me a video by a sourdough baker in Arizona, Proof Bread, where he applied this technique to a portion of the khorasan wheat flour in a batch of dough. His bread came out with an open crumb and excellent flavor and color, so I created this experiment to test an approximation of this process on spelt flour.

For my experiment, I made a guess at the highest proportion of flour I thought could be gelatinized prior to fermentation and baking without overly compromising the gluten structure of the final bread. This was a subjective judgment, of course, and stems from my use of gluten free grains and porridges in sourdough breads. I went with 1/3 of the total flour. I picked spelt flour mostly on a whim, but also because it has such a neat stretchy character. For comparison, I made a second dough with no scalded flour. I fermented, shaped, proofed, and baked both doughs as similarly as possible. For the scald, I heated 150g flour and 300g water to about 170F. This gelatinizes the flour and allows it to hold a lot of water (200% hydration!). The final hydration of the whole scald test dough was about 90% (some evaporation) and it felt similarly wet to the control, “no-scald” dough that was 77% hydration.

After I posted the video above of this experiment to social media, @mcw.mark told me more about saccarification, as outlined by Russian baker, Sergey Kirillov. This is an extended scald that sweetens the dough. Flour is combined with water and brought up to gelatinization temps (158-194F). Once it has cooled to 145-149F, an enzymatic flour such as whole grain rye flour or diastatic malt flour is added in order to boost the conversion of starches to sugars. The mix is then held at this latter temperature range for at least 1.5 hours.

You can see a detailed bread recipe by @corvus.corax with saccarification in this Facebook post of a spelt and blue cornmeal bread.

The scalded dough felt sticky and fragile throughout the stretching and folding phase of the bulk fermentation. However, by the time I shaped the two doughs, the reverse was true: the scalded dough felt stronger and held its shape nicely. The scalded dough baked up with better oven spring and though it was a little damp and shaggy, the crumb was more open at the bottom of the loaf. This bread was also noticeably sweeter.

The no-scald dough felt extensible and coherent early on, but became floppier as the bulk fermentation progressed. When I shaped it, it was weaker and wetter-feeling than the scalded dough. The no-scald dough had less oven spring, and while the crumb was more open at the edges of the loaf, it was tighter in the lower portion. This bread had a nice chewy texture and was less sweet than the scald bread. 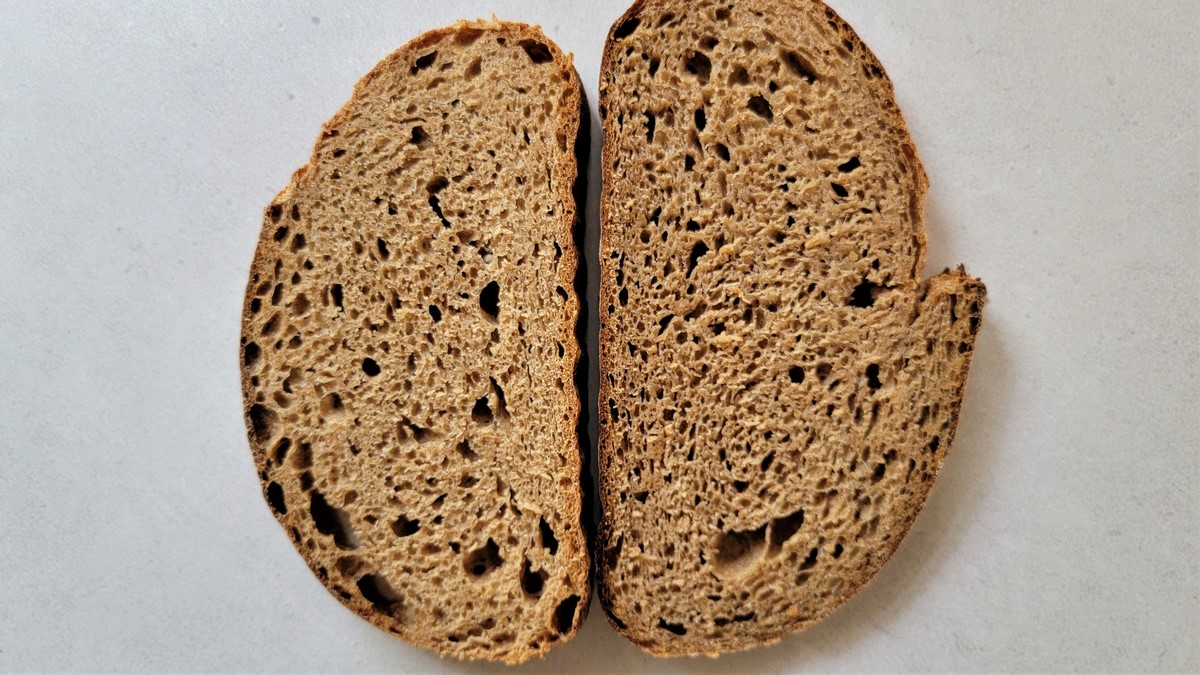 LEFT: no scald, chewier and dryer. RIGHT: scald, sweeter, more damp, and more open at the base (also darker in color).

I preferred the slightly sweeter flavor of the scald dough, as well as its appearance and ease of handling during shaping. However, the no-scald dough did have a nice chewy texture. I think another baker / bread eater may have different preferences, so I don’t consider one outcome better than the other. 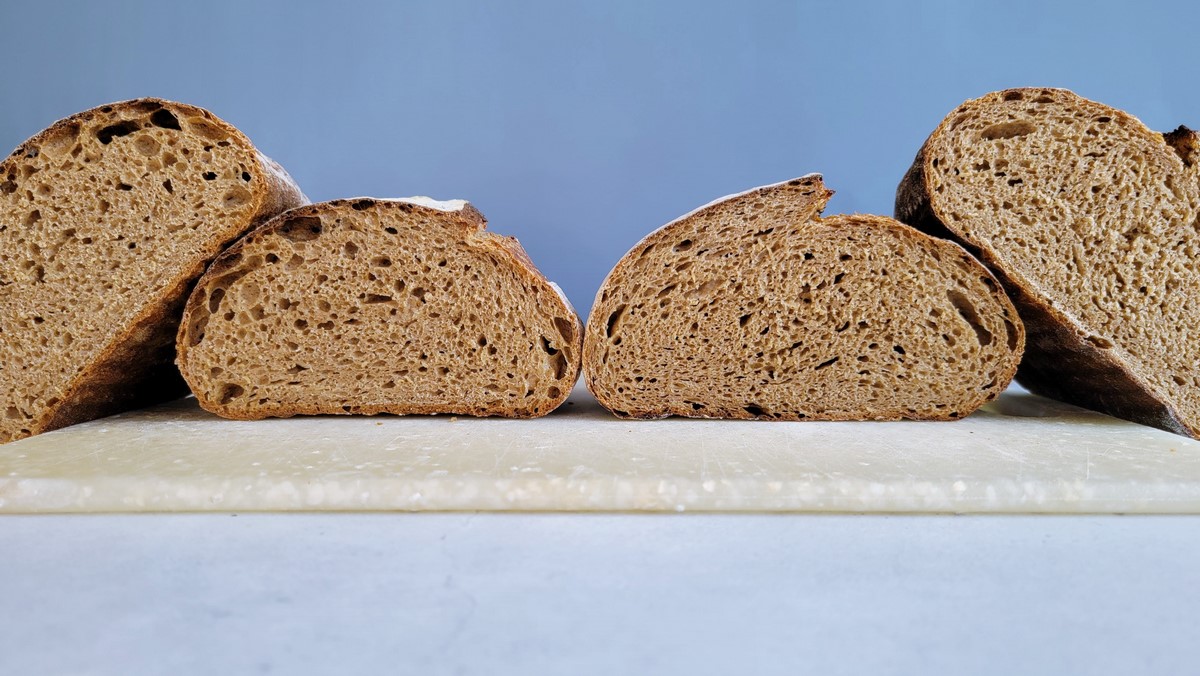 Both loaves turned out well and the recipes are below.

Nonetheless, to try to improve the damp texture of the scalded dough, I test-baked another scald loaf for about 10 minutes longer to see if that would dry out the inside. This was mostly a success, with no gummy bits when I cut the bread, but this loaf did have a very thin band of damp crumb toward the base. 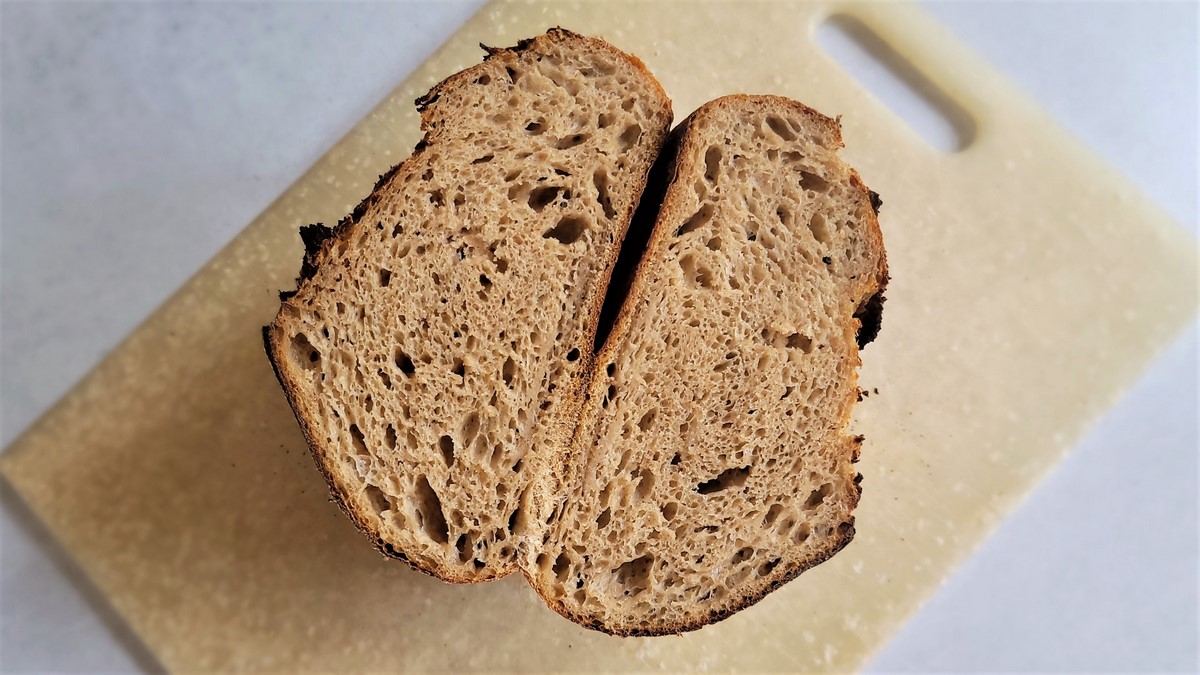 Some of the scald approaches I tried include: 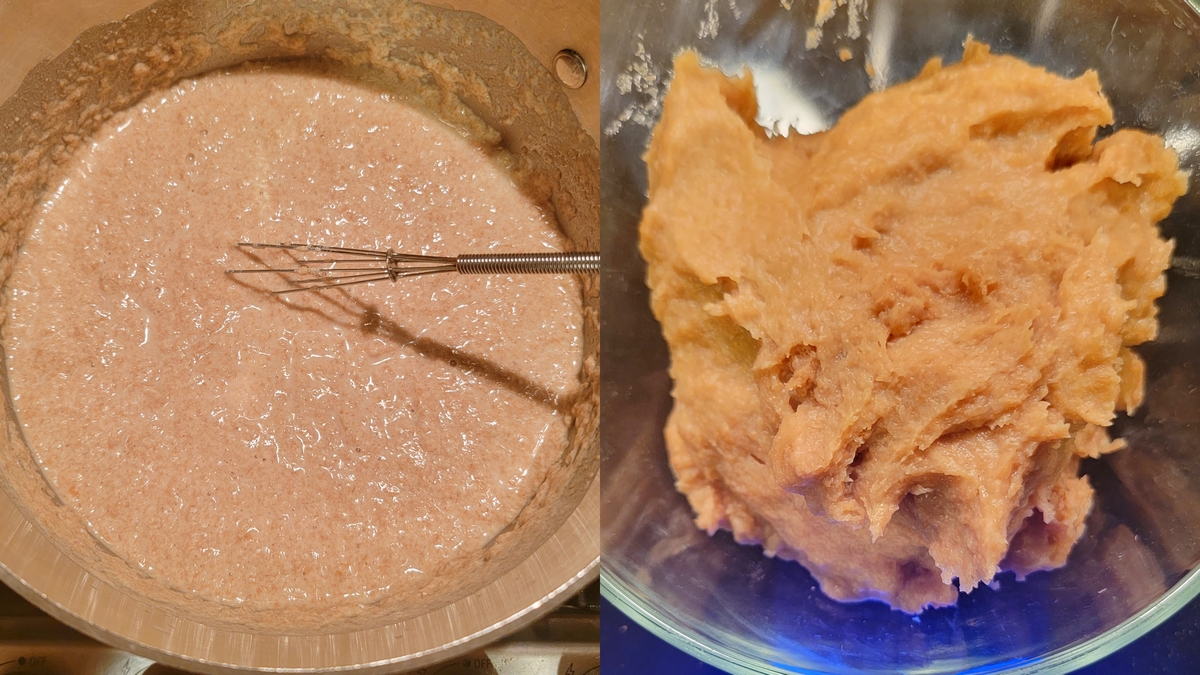 Before scalding and after scalding. 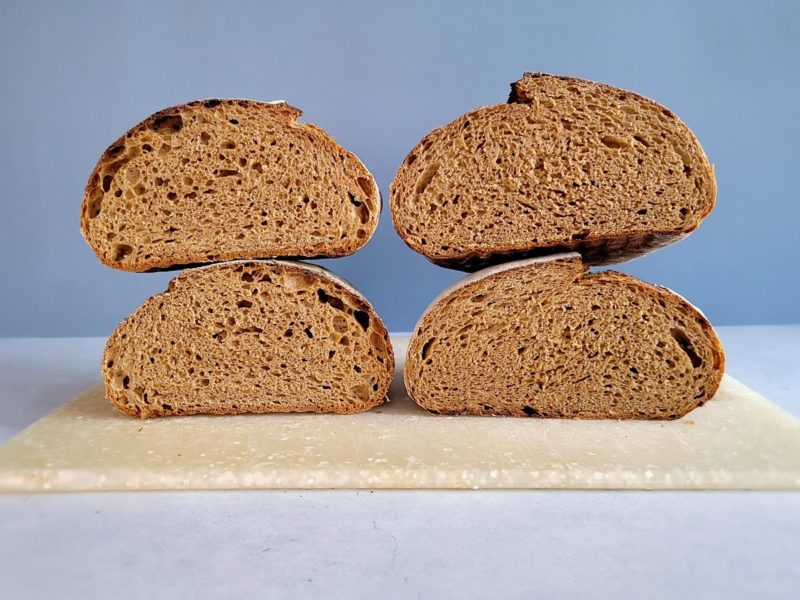 For a sweeter sourdough bread that becomes quite manageable by the time you shape it, try this recipe where a significant portion of the flour is scalded (cooked with water to reach 160-180F) before the dough is mixed.